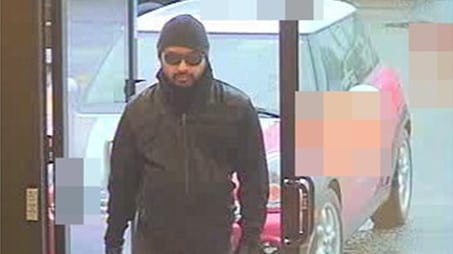 WHILE the Surrey RCMP continues to see a decrease in bank robberies being committed across the city due to a high solve rate, the detachment’s Robbery Unit is re-appealing for public assistance in identifying the last remaining bank robbery suspect from 2017.

Currently, the detachment has had only one bank robbery in 2018 and a suspect has been arrested and charged in that incident. Since 2015, the rate of bank robberies has decreased by 50% and the solve rate remains consistently above 90%.

“Thanks to the diligence of our robbery investigators in collaboration with our policing and community partners, we have had a near perfect solve rate for bank robberies the past few years,” says Surrey RCMP Sgt. Chad Greig. “Our partners within the financial sector have also assisted and minimized the impact of these crimes by having best practices in place including well-trained staff and quality surveillance video available to police.”

On March 3, 2017, Surrey RCMP responded to a robbery at a financial institution in the 10100 block of 152nd Street.  Fourteen days later on March 17, Langley RCMP and the Abbotsford Police Department responded two separate robberies at financial institutions in their jurisdictions. All three robberies are believed to have been committed by the same suspect. The Surrey RCMP made an initial appeal for information on these robberies to advance the investigation, however, the suspect has yet to be identified.

Surveillance photos recovered from the incidents (see photos from Surrey, Langley and Abbotsford) show the suspect as a South Asian or Filipino male, in his 30s, 5’8”, with a medium build, dark beard and moustache, and wearing a black toque, sunglasses, black gloves, black jacket and black pants.

If you wish to make an anonymous report, contact Crime Stoppers at 1-800-222-TIPS or go to www.solvecrime.ca.