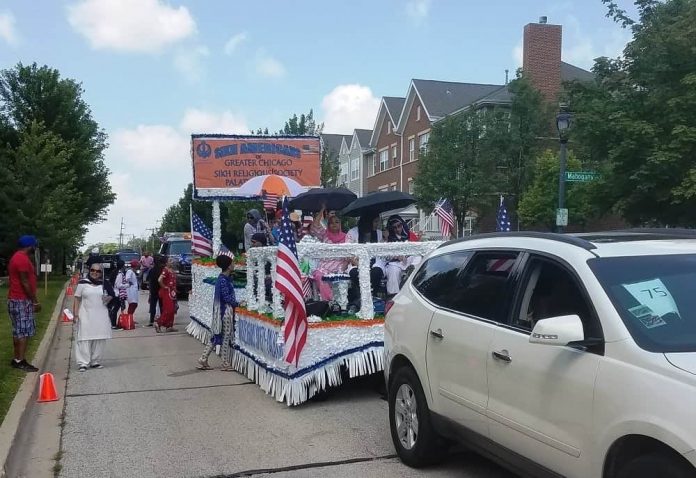 CHICAGO: The entry of Sikh Religious Society Palatine, Illinois (S.R.S.) was officially judged the “Best of Parade” out of 85 entries in the American Independence Day parade held on Saturday, June 30 in the village of Palatine, a suburb of Chicago, Illinois.

The Sikh society’s unit received an award certificate for this distinction. The society has received such awards in previous years as well. This annual parade is organized by the Palatine Jaycees as a part of Home Town Festival to celebrate the Fouth of July. It’s the 62nd year of this annual festival in the village of Palatine, where Sikh Religious Society has been operating a gurdwara (Sikh place of worship) since 1979.

Despite the heat, enthusiastic crowds of people lined the streets along the parade route in great numbers. The parade was also broadcast on local Comcast TV channel 19.

The parade led off with a large contingent of police vehicles and officers, followed by fire equipment, and many political candidates running for state, local and national offices.

Illinois Governor Bruce Rauner and attorney general candidate Erika Harold were among the statewide candidates working the crowd in the sweltering heat.

Sikh American men, women and children affiliated with Palatine Gurdwara marched alongside their float decorated in patriotic colors and flags. The Sikhs gave out bottles of ice cold water, and candy to the spectators all along the parade route.

The parade ended near the community park where Palatine’s Fourth of July Celebration was in full swing. The festival included fireworks, entertainment, food vendors, parade, carnival, Business expo, craft fair, and many other family activities.

“We are so proud to receive the Best of Parade award. The purpose of our participation is to celebrate America’s Independence Day, and also proudly display our Sikh American community heritage and culture. It’s a great opportunity to create awareness about Sikhs,” said Rajinder Singh Mago, coordinator of the Sikh participation in the parade.

The spectators welcomed and cheered the Sikh Americans walking in the parade sporting flowing beards and colorful turbans.

An informational pamphlet “The Sikhs” was also distributed to the curious spectators.

Palatine is home to Sikh Religious Society Gurdwara, the oldest in Midwest America.