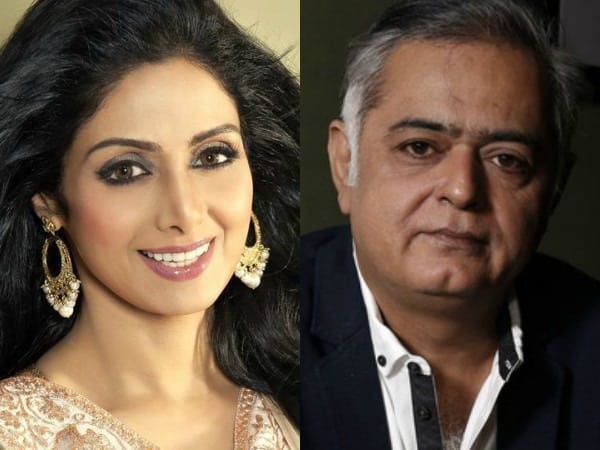 Mumbai (PTI) : Director Hansal Mehta says the film he was planning to make with Sridevi was about a woman who discovers womanhood in her late 50s.

When the filmmaker learnt about Sridevi’s death, he had tweeted that he was planning to approach her for a project.

“It is a beautiful story, I have got the rights for it. It is from a book, a novella… It is a Chinese story. I felt it would be wonderful to do it with Sridevi. I had thought of narrating the idea to her, but she passed away. It was shocking,” Mehta told PTI.

The “Aligarh” director says the film would have revolved around the veteran superstar.

“It was a departure from the kind of films I was making. It is a tale about love, about how in the late 50s you are discovering womanhood… Motherhood and marriage, without either being a wife or a mother,” he says.

“She (the protagonist) experiences all these emotions supposedly… All these years she has been single,” he adds.

Mehta says he is determined to go ahead with the film but is yet to find the actor who would now star in the main role.

“I will dedicate it to Sridevi,” he adds.

Mehta had met Sridevi during the preview screening of his film “Dil Pe Mat Le Yaar” back in 2000.

“I had very little interaction with her. I believe she had seen my work. She was a great actor, an inspiration to lot of actors,” he recounts.

Sridevi, 54, died of accidental drowning in the bath tub of a Dubai hotel on February 24.