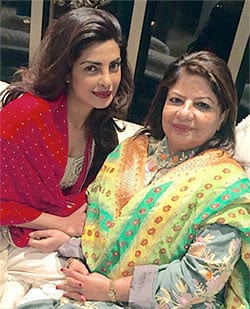 Mumbai (PTI) : Actor Priyanka Chopra’s mother, Madhu Chopra, today said that when they backed their first project, a Bhojpuri film, under their production house, a lot of people from within the industry sneered at them.

The actor started her banner, Purple Pebble Pictures in 2015 and released a Bhojpuri film “Bam Bam Bol Raha Hai Kashi” the next year.

Chopra said when the project was on the brink of release, many colleagues of the actor told her that it does not go with Priyanka’s “brand image”.

“The first film we did was a Bhojpuri one. You can’t imagine what reaction I got from Mumbai, Priyanka’s colleagues and peers. They said, ‘Your mom has gone mad, why are you all even making Bhojpuri films? It doesn’t go with your brand image’.

“But I told Priyanka, you are uplifting a region that needs your attention. You are doing it for passion, for a cause. I can say it with great pride that commercial success or business was not on our mind. It was forging a path and becoming an option for new regions,” she said.

Chopra was speaking at a panel discussion at the ongoing FICCI Frames.

The producer said they wanted to make regional films “not limited to a particular region, but every part of the country”.

“If you have good content, people will come. But for regional films, distribution is a major challenge because people are still testing the waters,” she added.

Chopra said her production house has stayed away from taking the cast of a quintessential Hindi movie to make a regional film.

“We are in our third year and we have nine films, all from different regions. We have made Assamese, Marathi, Punjabi, Sikkimese films… The thing about our production house is, we don’t take Hindi film industry to various regions but take the cast and crew from that region, make the film in that region and give them a platform,” she said.

The session, titled ‘Beyond Bollywood: Does regional cinema make better sense?’, had filmmakers such as Aniruddha Roy Chaudhary, Rima Das, Vijay and Ishaan Randeria on the panel.