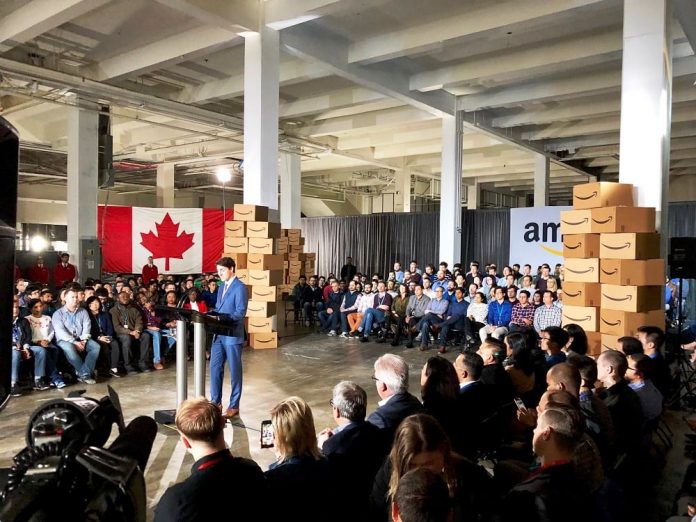 PRIME Minister Justin Trudeau on Monday welcomed Amazon’s announcement that it will create 3,000 new jobs in Vancouver. Combined with the 1,000 new jobs announced by Amazon in November 2017, this will bring the company’s workforce in Canada to over 9,000 employees.

Trudeau said: “Today’s announcement is a testament to Canada’s highly-skilled, diverse workforce and tremendous potential as an innovation and tech hub. Tech talent and investment are coming to our country in record numbers, and companies like Amazon are bringing even more energy, vision – and thousands of good jobs – to Canada. We are proud to champion these companies, who invest in our talent and the future of our economy, and create new opportunities for Canadians to succeed.”

In a statement, Trudeau said that Canada is known for its excellent post-secondary institutions and robust high-tech sector, which produce top-tier talent in science, technology, engineering, and mathematics. Amazon’s expansion will help Canada develop and retain talented students and professionals, create good, well-paying middle class jobs, and grow our economy.

PREMIER John Horgan and Bruce Ralston, Minister of Jobs, Trade and Technology, said in a statement: “Today’s announcement by Amazon reflects the strength of British Columbia’s economy and the talent of our people.

“This investment will advance B.C.’s well-earned reputation as an innovation hub, and will promote growth in all sectors of our economy, in all regions.

“B.C. is a sound place to invest. Last week, Standard and Poor’s confirmed B.C.’s ‘AAA’ long-term credit rating. In March, British Columbia had the lowest unemployment rate among the provinces at 4.7%. B.C. leads Canada in year-over-year wage growth. And B.C.’s GDP growth is the highest among all provinces.

“We must make sure everyone benefits from the wealth our province creates. Our government will reduce inequality, provide fair conditions for workers, grow and diversify our economy, and open the doors of opportunity for people.”