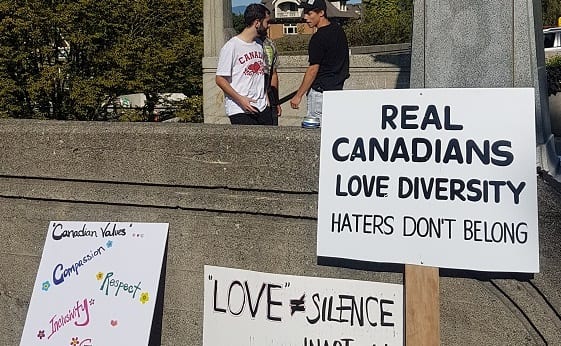 THE planned protests outside Vancouver City Hall on Saturday passed without major incident.

A small number of right-wing protestors took part in a march organized by the Worldwide Coalition Against Islam, and the Cultural Action Party, a registered BC political party.

A much larger counter protest, led by a group called Stand Up to Racism Metro Vancouver, was addressed by speakers including Vancouver Mayor Gregor Robertson and a representative of

The event was largely peaceful with minimal damage to public property and only a small number of minor disturbances which were handled by the Vancouver Police Department (VPD).

The VPD said in a statement:  “Officers made five arrests for breach of the peace, and two people were escorted out of the rally to prevent a disturbance. There were no reported assaults

At the request of the VPD, the City of Vancouver implemented road closures and parking restrictions, provided traffic management support and took additional precautions to minimize disruption to the public.

The City noted that it does not issue permits for any rallies or protests and did not sanction today’s rally. City Hall is public property, therefore the City could not prevent people from assembling near the building or exercising their right to freedom of expression.