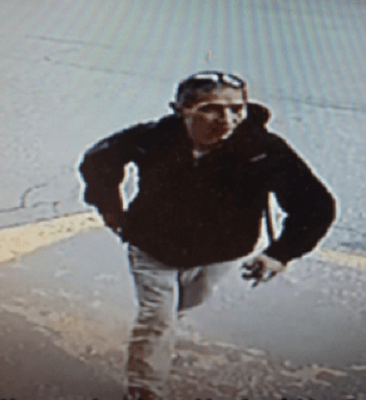 LAST week on Friday (May 22) at 3:15 p.m., Abbotsford Police Department patrol officers responded to the strip mall parking lot at 31970 South Fraser Way for a report of an assault in progress.

Officers arrived and were advised that a verbal altercation between two parties resulted in one person deploying pepper spray, and then fleeing in a vehicle. During this altercation, an innocent bystander was affected by the pepper spray and her vehicle was struck as one of the suspect vehicles fled.

Fortunately, neither the victim nor other nearby citizens, sustained any serious injuries.

Abbotsford Police are asking for your assistance in identifying the parties involved in this altercation. The first picture is of the male who deployed the pepper spray towards the male and female in the second picture.

The couple fled in the pictured vehicle, an earlier model, dark coloured Buick Century, which struck the bystander’s vehicle as it left the area.

Anyone who witnessed these incidents, or has CCTV, dashcam video or information about this investigation, is asked to contact the Abbotsford Police Department at 604-859-5225.