AGAINST the backdrop of the London, ON, attack that targeted and killed a Muslim family, the deep pain associated with revelations about the hundreds of children buried on the grounds of former residential schools, and ongoing reports of discrimination against Canadians of Asian origin, many are attempting to reconcile the realities of the nation’s attitudes towards diversity and equality with national mythologizing about multiculturalism.

The second report from a comprehensive research series from the non-profit Angus Reid Institute in partnership with the University of British Columbia dives deeply into the sentiments of those living in this country – to illuminate perceptions and attitudes towards diversity and racism.

For 85 per cent of the population, that Canada is home to people from different races and ethnicities betters the nation. Canadians of all regions of the country, age groups, political ideologies and ethnic backgrounds agree on this point.

But does everyone feel it? Contradictions abound. Fully one-in-three (34%) say “Canada is a racist country.” Among those who believe this most keenly: visible minorities (42 per cent of whom say so) and women, particularly those under the age of 35, who are much more likely than men to hold this view (54%).

On the other hand, however, fewer than one-in-eight (12%) say they believe some races are superior to others. Further, 41 per cent of Canadians say that people seeing discrimination where it does not exist is a bigger problem for the country than people not being able to see where it does.

These perspectives coalesce to form four mindsets with which Canadians view diversity. This report analyzes each – the Detractors, Guarded, Accepting and Advocates – to better understand the expectations of Canadians heading into the second half century of official multiculturalism. 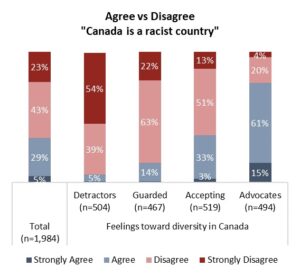 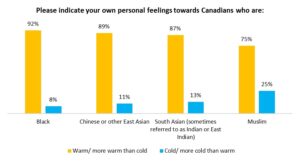 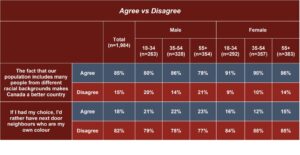 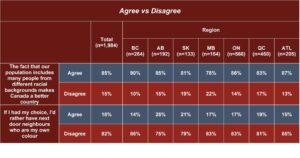 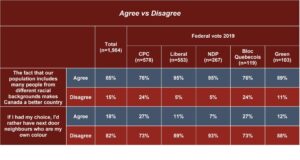