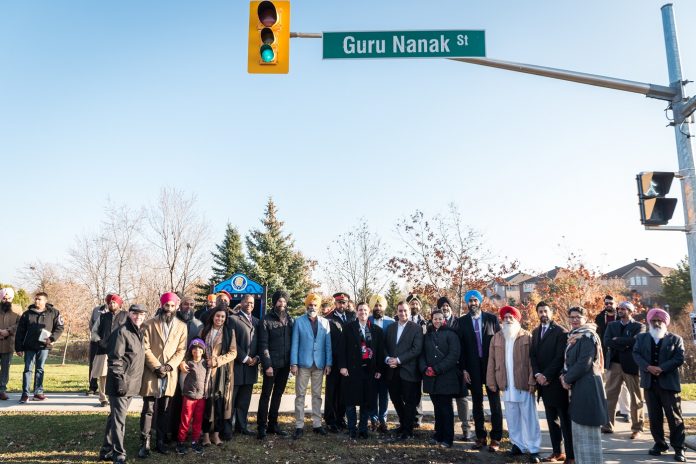 ON Sunday, November 24, the City of Brampton unveiled its new Guru Nanak Street, as part of the city’s recognition of Guru Nanak’s 550th birth anniversary.

Wards 9 and 10 Regional Councillor Gurpreet Singh Dhillon, City Councillor Harkirat Singh, and Mayor Patrick Brampton, who worked collaboratively to have the naming passed in October, were joined by Pastor Randy Neilson from the Bramalea Christian Fellowship, and Imam Zahir Bacchus from the Jamiat ul Ansar (Great Lakes) Mosque, as the official speakers.

Guru Nanak, who lived from 1469 to 1539 in the Punjab region of South Asia, was an advocate for human rights, gender equality, and the promotion of unity between all human beings. There are approximately 150,000 to 200,000 Sikhs in Brampton.

The street was named in accordance to the City of Brampton’s asset naming policy which was adopted and passed unanimously by City Council earlier this year.

“In Brampton, we celebrate our minorities, our diverse communities, and all of their contributions,” said Dhillon. “Today’s unveiling of Guru Nanak Street reiterates that we are positioning ourselves to be a leader in inclusion and diversity.”

Dhillon, who was born in Windsor, and raised in Brampton, also highlighted the racism and challenges he faced growing up because of his religion and identity, and stressed the importance and benefits of educating our children of living harmoniously with one another.

Harkirat Singh stated: “It was surreal driving to the unveiling today and seeing the signs up, it was a heartwarming feeling. I hope the street sign can serve as a reminder to our diverse community and our youth about the teachings of Guru Nanak Dev Ji. Thank you to everyone who has made this possible and to all community members for coming out in such large numbers.”

The section of road that has been named Guru Nanak Street stretches from Great Lakes Drive to Dixie Road. There is currently only one municipal address on the road, which is the Guru Nanak Mission Centre Gurdwara. No other addresses were affected.