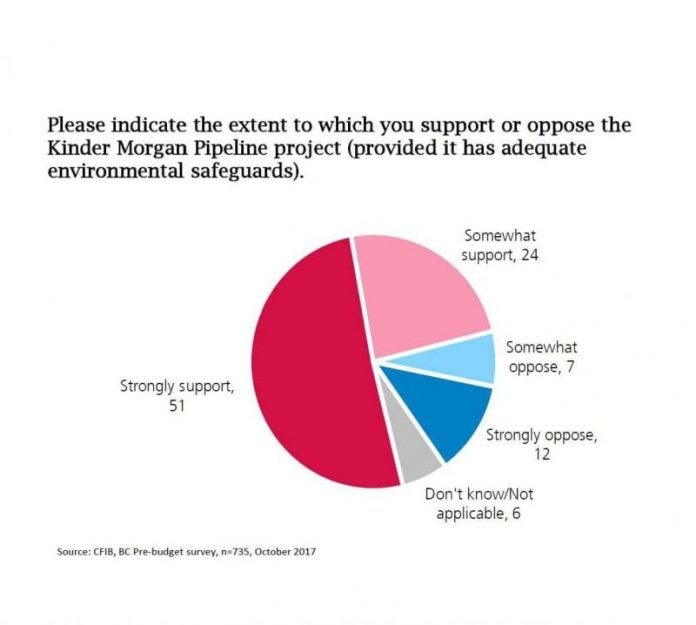 THE following open letter was sent on Tuesday to Premier John Horgan by five key B.C. business organizations: The Independent Contractors and Businesses Association, The Canadian Federation of Independent Business, Canadian Manufacturers and Exporters, the Business Council of British Columbia, and the BC Chamber of Commerce.

We are writing to express our deep concern regarding your government’s opposition to the Kinder Morgan Trans Mountain Pipeline expansion project.

Regardless of one’s personal views on the pipeline, it has been given a green-light to proceed by both the National Energy Board (NEB), and the federal cabinet. The former BC government also explicitly approved the project following significant deliberation and debate.

The pipeline proponent went through a four- year process of consultation and rigorous regulatory review and is meeting 157 federal conditions as well as 37 additional provincial conditions. Many of these requirements were crafted to ensure the highest possible level of environmental protection and operate separately from the $1.5 billion commitment by the Trudeau government to protect coast lines, including a $500 million commitment to BC. Now the rule of law must be respected, and the expansion of the pipeline must be allowed to proceed. Failing to do so, in practice or in spirit, by creating additional delays and uncertainty, is clearly not in the best interests of British Columbia or Canada.

Failing to respect the rule of law and the largely federal jurisdiction over this project is not only deeply unfair to the stakeholders who respected the process, but also represents a fundamental departure from what it means for BC to be part of Canada. The stakes are high. Many small business owners, construction workers, people who support their families in manufacturing, and First Nations are now caught in the crossfire as a result of the uncertainty surrounding the project’s future and the retaliatory trade actions of the Alberta Government. To achieve many of the priorities of your government, from creating good paying jobs, to easing affordability concerns, to spending more on housing, education and healthcare, the province needs the investment and revenue that will flow from this $7.4 billion investment in our economy.

We are concerned that if a resolution is not found quickly, British Columbians, already facing the prospects of Alberta stopping negotiations to purchase our hydro power and banning the sale of BC wine, will be hurt by additional retaliatory action from Alberta. Not finding a resolution quickly creates further risks including expensive lawsuits, and large companies going elsewhere to invest their dollars, create jobs and attract talent.

Like most British Columbians, we believe that economic growth and environmental protection can and do go together, a view reiterated by Prime Minister Justin Trudeau. It might interest you to know that a recent poll of small business owners—major employers and drivers of economic growth—shows strong support for the project (see linked chart). Many of these businesses will provide goods and services to support this project, from welding supplies and construction materials to hotel rooms, restaurant meals and haircuts which, in turn, will provide thousands of hard-working British Columbians with good-paying jobs to support their families and their communities.

We urge you and your government to stop its opposition to this approved project before we do further damage to the province’s reputation as one that is open for business or, worse, causes a provincial trade war that inflicts lasting damage on the relationship between BC and Alberta. It’s now time to put shovels in the ground.

Policies passed at BC Chamber AGM will help businesses compete, innovate and be inclusive