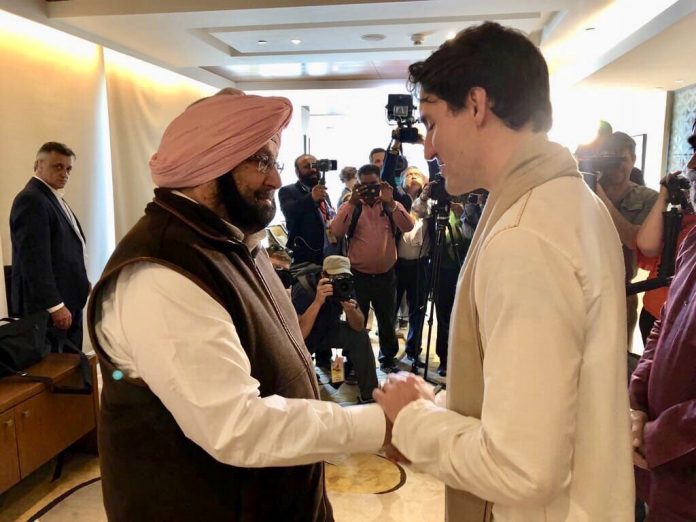 “Really happy to receive categorical assurance from Canadian PM @JustinTrudeau that his country does not support any separatist movement. His words are a big relief to all of us here in India and we look forward to his government’s support in tackling fringe separatist elements.” – Punjab Chief Minister Amarinder Singh on Twitter.

Amritsar (Punjab) (PTI): Punjab Chief Minister Amarinder Singh on Wednesday handed Canadian Prime Minister Justin Trudeau a list of nine Canada-based operatives allegedly involved in target-killings and other hate crimes in Punjab, including financing and supplying of weapons for terrorist activities, as the ‘Khalistan’ issue featured prominently in the talks between the two leaders.

The leaders held a 40-minute long meeting at a hotel here after Trudeau paid obeisance at the Golden Temple and visited the Partition Museum.

Trudeau assured the Punjab chief minister that his country did not support “any separatist movement in India or elsewhere,” said Raveen Thukral, the chief minister’s media advisor.

The “categorical assurance” from Trudeau came after Amarinder Singh sought the Canadian prime minister’s cooperation in cracking down on fringe elements, constituting a miniscule percentage of Canadian population, he added.

Citing the separatist movement in Quebec, Trudeau said he had dealt with such threats all his life and was fully aware of the dangers of violence, Thukral said.

“Really happy to receive categorical assurance from Canadian PM @JustinTrudeau that his country does not support any separatist movement. His words are a big relief to all of us here in India and we look forward to his government’s support in tackling fringe separatist elements,” Singh tweeted after the meeting.

The Punjab chief minister gave Trudeau a list of nine Category ‘A’ Canada-based operatives alleged to be involved in hate crimes, terrorist activities and trying to radicalize youth and children here, Thukral said.

Amarinder Singh shook hands with Sajjan during the talks.

Only last year, Amarinder Singh had refused to meet Harjit Sajjan when he visited Punjab, accusing him of being a “Khalistani sympathiser”.

According to officials, the Punjab police believes that the conspirators and financiers in the targeted killing cases in the state were operating from foreign soil, including Canada, UK and Italy.

Freedom of speech was enshrined in the Indian Constitution but separatists and hardliners and those propagating violence had lost any such right as they were rejected outright by the people of Punjab, Singh said.

He stressed that people contesting elections on the plank of a separate Sikh state ended up losing their security deposits, said Thukral.

Trudeau assured Amarinder Singh of addressing all concerns that were raised, saying he looked forward to closer ties with India, particularly Punjab, which he was happy to see progressing well.

During the meeting, Amarinder Singh called for cooperation between India and Canada on the issues of terrorism, crime and drugs, while seeking greater sharing of relevant information in the interest of national and international security.

Responding to concerns raised in some quarters on reports of human rights violations, the chief minister said any aberrations were always dealt with strictly, with even policemen being sent to jail by the courts.

He reiterated his government’s firm commitment to the protection of human rights of all individuals, Thukral said.