CHRISTOPHER Roy, 36, of Vancouver has been identified as the homicide victim whose body was located inside a burned vehicle in Langley on July 21.

Integrated Homicide Investigation Team (IHIT) investigators said that Roy was known to police, had a criminal record, and was connected to the current Lower Mainland Gang Conflict. This is believed to be a targeted incident, they said.

Roy’s next of kin have been notified.

IHIT is requesting public assistance to further its ongoing investigation of the homicide and vehicle fire in Langley.

On July 21, at approximately 7 p.m., Langley RCMP responded to the 8200-block of 197 Street for a vehicle fire. After the fire was extinguished, a deceased victim was located inside the burned vehicle.

IHIT is working closely with its partners in the Integrated Forensic Identification Section and the Langley RCMP to analyze evidence and interview witnesses.

IHIT investigators said they are releasing Roy’s name and details to further the investigation. The distinct red Ford F-150 is also still of interest.

Last week, IHIT investigators announced that they had determined that the burned vehicle was a Red Ford F150 (see photos) with body-kit modifications. 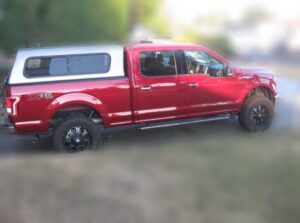 “The Red Ford F150 has modifications and may have stood out,” IHIT Sgt. David Lee said. “We are looking to speak to anyone who may have seen it.”

Lee said: “There are associates of Mr. Roy who knew of his activities prior to his death. We ask for those people to come forward.”