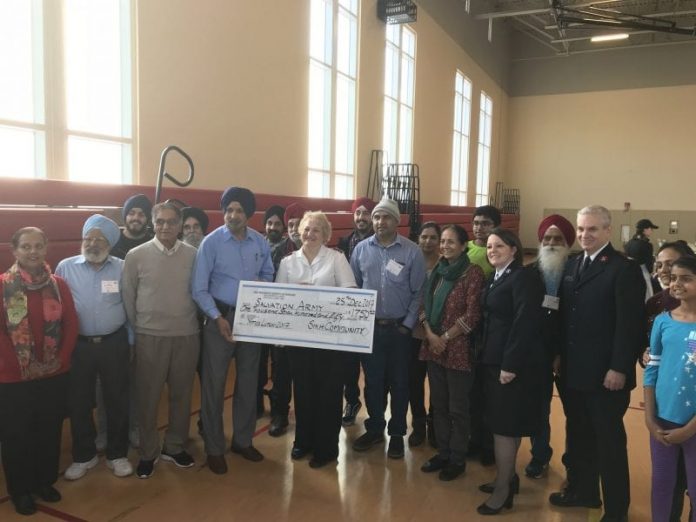 CHICAGO: Members of the Sikh Religious Society, Palatine, Illinois, a suburb of Chicago, served hot meals to the needy families on Christmas Day at Salvation Army located at 825 North Christiana Avenue in Chicago.

Hot traditional meals (turkey, chicken, mashed potatoes, beans, stuffing, bread rolls and apple pie) for over 800 people, donated by the Sikh community, were prepared at the Salvation Army kitchen. Sikhs served the meals to the needy guests with great respect and kindness.

Hardial Singh Deol who has been on this journey to serve meals at Salvation Army since 1992 handed over the donation checks collected from the Sikh community member volunteers present there to serve to Major Nancy Powers of Salvation Army. Sikh community youth volunteers handed out cookies, bagels and cakes to the families after the meal at the exit door.

Amardeep Singh Chawla donated money and also two van loads of food for the food pantry at the same location. Powers thanked Chawla and his family for his donations to the food pantry.

Powers thanked everyone for their service and contributions, and expressed her desire to maintain a long term relationship with the Sikh Gurdwara Sahib in Palatine.

The tradition of Langar (free food) was started in the late fifteenth century by Guru Nanak, the founder of the Sikh faith. The Sikh scripture Guru Granth Sahib teaches that:

“Jithai Neech Samaalian, Tithai Nadar Teri Bakhsees” (God’s grace is especially present when the poor and the lowly are looked after).