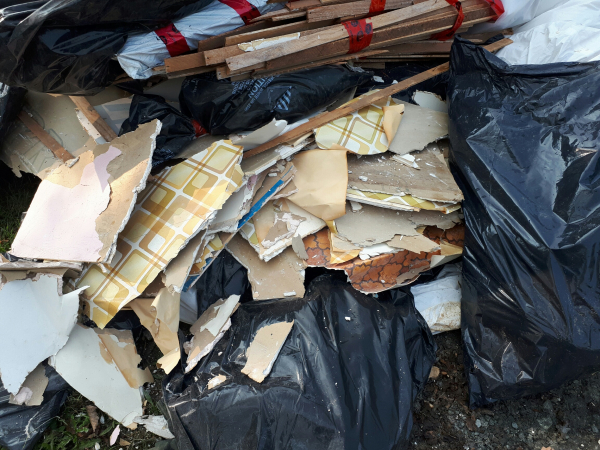 SOMEWHERE there’s a homeowner in Delta, Surrey or perhaps New Westminster or Richmond, with a major renovation underway, who might recognize some illegally dumped debris. It’s a growing problem in Delta, and it’s already cost taxpayers and private residents about $50,000-$60,000 in the past two weeks, say Delta Police.

“We’re hoping by releasing pictures of this dumped debris, that someone might recognize items from their renovation and contact police,” said Cris Leykauf, spokesperson for Delta Police, on Friday. They’re asked to call 604-946-4411 and quote file #20-22163.

Large dump truck or bin sized loads of renovation waste, potentially from more than one project, has been dumped in farm areas and off rural roads in north and south Delta.

The mixed renovation waste includes uncontained drywall, lumber, insulation, glass, plumbing pipes, flooring, and some residential household waste. The drywall poses an environmental and health hazard as at least one of the dump sites that tested positive for asbestos content required specialized cleanup and disposal methods. The cost to City of Delta can reach or exceed $10,000 per dump site.

“As contents appear to be mixed, officers believe they have come from various locations,” said Leykauf. She noted that the investigation is ongoing, but police hope to obtain new information by releasing photos of the debris.

“Our residents enjoy the many open and green areas in Delta, and illegal dumping directly impacts everyone,” said Leykauf. “While at least in one case the costs of cleanup have had to be directly born by the property owner, all Delta residents are unfortunately going to be paying for this.”

Depending on circumstances, penalties may include bylaw offences and fines and criminal mischief charges. With hazardous waste, penalties can be up to $100,000 under the Environmental Management Act, and six months in jail.