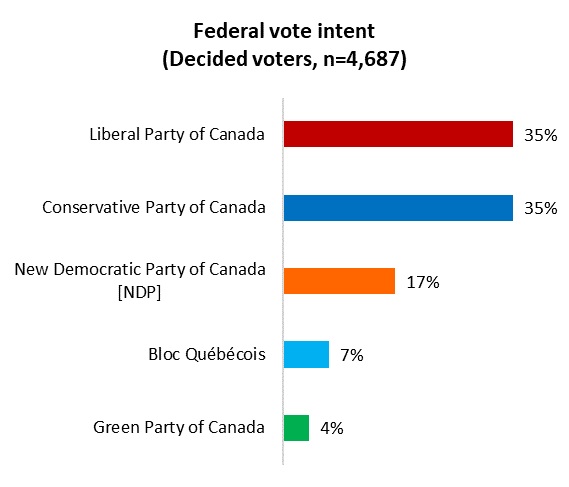 EXACTLY three weeks from a scheduled re-opening of Parliament with a Speech from the Throne that may ultimately trigger a fall election, the latest public opinion data from the non-profit Angus Reid Institute finds the Liberal and Conservative parties of Canada in a tie, with 35 per cent of decided voters each indicating they’d cast a ballot either for the incumbents or the official opposition.

This represents a small but perceptible four-point rise in fortunes for the CPC since May. The Liberals have largely survived the WE Scandal – for now – emerging over the same period of time two points lower than where they stood with the electorate in the spring.

The results of this poll of more than 5,000 Canadian adults suggests two strong undercurrents continue to pull and push against the other. The first: a committed and motivated Conservative base united in its desire to consign the Trudeau government to the annals of Canadian politics. The second: Liberal dominance in vote-rich Ontario and Canada’s big cities, places the CPC must be able to make inroads in order to win a general election.

Into this environment comes new CPC leader Erin O’Toole, tasked with convincing the centre-left he is an appealing choice – something his predecessor Andrew Scheer failed to do. O’Toole has room to grow, as significant numbers of non-CPC voters say they have yet to make up their mind about him.

2023 Liberal National Convention from May 4-6