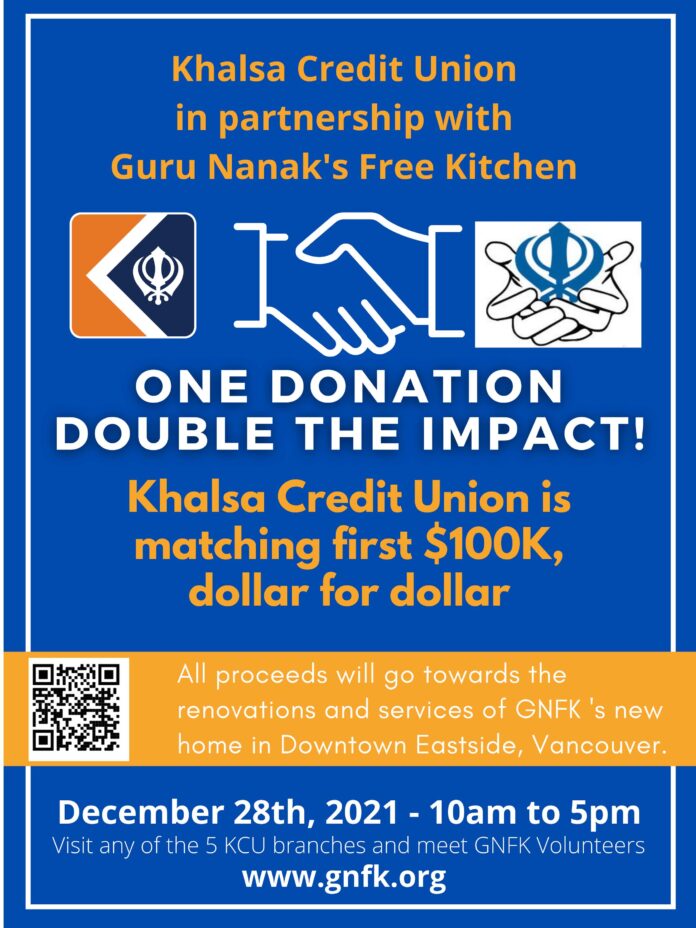 GURU Nanak’s Free Kitchen (GNFK) — Registered Charity Number 807569728 — has served over one million meals to those in need in Vancouver’s Downtown Eastside (DTES) and elsewhere since its inception in 2006.

Since 2009, Khalsa Credit Union have supported GNFK with a donation of two fully equipped one-tonne food delivery trucks. Due to this donation, GNFK have been enabled to deliver and serve in DTES and other areas in the Lower Mainland.

In November 2021, GNFK, thanks to the generosity of the community, acquired a permanent location at 215 East Hastings Street in Vancouver. Three meals will be served seven days a week. Currently, extensive renovations are taking place on both floors which will include a fully equipped and functional commercial kitchen.

On December 28, Khalsa Credit Union is hosting a fundraiser, pledging up to $100,000 to match the community members’ donations dollar for dollar. All proceeds will go towards the renovation of GNFK’s new permanent facility at East Hastings Street.

“We are grateful for the continued support from Khalsa Credit Union. Our volunteers will be available from 10 a.m. to 5 p.m. on December 28 at various Khalsa Credit Union branches with information on our future plans. All donors will be issued with tax deductible receipts,” said Bal Nijjar, GNFK Event Coordinator.

Khalsa Credit Union said it is looking forward to contribute to the growth of GNFK. Hardeep S Bains, COO, explained: “GNFK is a organization that is close to our members’ hearts. It is volunteer-led, and we look forward to raise much needed funds for this great charity.”

In the event donors are unable to make an in-person donation at Khalsa Credit Union branches, an online donation has been set up at www.gnfk.org.