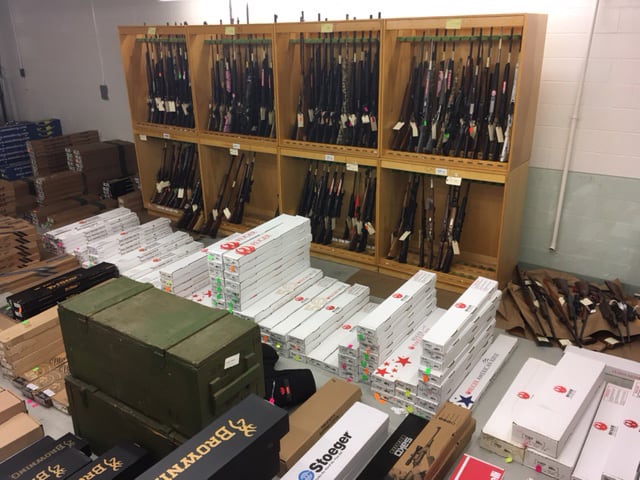 AN Alberta gun store in Cardston was searched by ALERT (Alberta Law Enforcement Response Teams) following an investigation into firearms trafficking and its entire firearms inventory of 1,000 guns and one million rounds of ammunition was seized.
ALERT Lethbridge’s organized crime and gang team and the RCMP National Weapons Enforcement Support Team (NWEST) conducted a five-month investigation into K&D Implements, which resulted in a search warrant being executed on May 29. K&D Implements was searched with the assistance of Cardston RCMP and Lethbridge Police Service, and two of the store’s owners were arrested.

ALERT alleges that K&D Implements was selling firearms and ammunition illegally. The store owners are accused of failing to ensure that firearms purchasers provided valid Possession Acquisition Licenses (PAL), hence constituting the charge of firearms trafficking.
“This gun store needlessly put public safety at risk by allowing conceivably anyone to acquire guns. We would be naïve to believe that this was not exploited by organized crime and the criminal element,” said ALERT Lethbridge Staff-Sgt. Jason Walper.
Over the course of ALERT’s investigation a variety of specialized techniques and resources were used to support these allegations. Investigators allege that these offences took place on a number of occasions.
Given the severity of the allegations against the gun store and the associated public safety risks, the entire store’s inventory was seized. NWEST will conduct further analysis on the items seized, which includes:
* Over 1 million rounds of ammunition;
* 49 handguns;
* 972 long guns;
* 270 kilograms of gun powder;
* 446 kilograms of Tannerite, a binary explosive material;
* 12,000 firearm primers.
Dean Sommerfeldt, 58, Todd Sommerfeldt, 31, have been jointly charged with trafficking a firearm, possession of weapons for the purpose of trafficking, careless storage of a restricted weapon, and transfer of a weapon and / or ammunition without authority.
Both men were released from custody on a number of court imposed conditions, including not to possess any firearms.
“This case was much like many others in that a small piece of information, gathered in the day to day duties of our general duty members, lit the fuse to spark a much larger investigation. I am proud of the work done by our RCMP officers in the communities around the province every day,” said RCMP Superintendent Garrett Woolsey.

Made-in-Alberta machine guns seized in Edmonton. How many have come to B.C.?