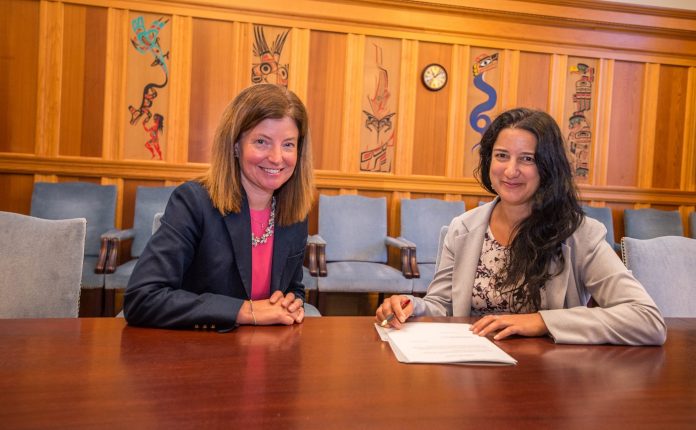 KASARI Govender was sworn in by Acting Clerk Kate Ryan-Lloyd as B.C.’s new Human Rights Commissioner at the Legislature in Victoria on Tuesday.

The Office of the Human Rights Commissioner will be headquartered in Vancouver. It is Canada’s first fully independent human rights commission, and reports directly to the legislative assembly.

The mandate of the office includes educating British Columbians on human rights, as well as examining and addressing issues of systemic discrimination.

On Thursday, Govender outlined her key priorities to media.

“I’m proud to be serving all British Columbians in this important role,” she said. “At the heart of human rights is equality. Equality is not treating everyone the same. It is about treating people according to their unique needs and circumstances. My job as commissioner is to be a watchdog for human rights in this province.”

“One of my first priorities is to enhance public understanding of both rights and obligations under B.C.’s human rights code,” she added. “My objective is to create a new culture of human rights in this province.”

In addition to educating British Columbians on human rights, the Office’s mandate includes examining and addressing underlying issues of discrimination.

The Office joins two other institutions in providing human rights oversight in the province: the B.C. Human Rights Tribunal, which adjudicates individual complaints, and the Human Rights Clinic, which provides free legal representation to complainants who have cases before the Tribunal. Both will continue in their roles.

In the coming weeks, Govender will be talking with British Columbians in various parts of the province in order to shape priorities for B.C.’s new human rights commission.

GOVENDER has devoted her life to promoting human rights, with a focus on the rights of those most marginalized and vulnerable. She is passionate about using her skills as a lawyer and community builder to create a more equal and just B.C. She has worked closely with organizations and communities promoting gender equality, Indigenous rights, children’s rights, the rights of people with disabilities and the rights of migrant communities.

From 2008 until 2019, Govender held leadership positions at West Coast LEAF, including as Executive Director from 2011. She has co-authored a number of key reports and articles, and speaks widely on issues such as violence against women, access to justice, balancing human rights and regulating hate speech. Earlier work includes pivotal roles in establishing the Women’s Legal Centre and a non-profit legal clinic in British Columbia.

In addition to her role as Human Rights Commissioner, Govender is a mother, an aunt, a daughter and a sister.

Learn about the commissioner in her own words.