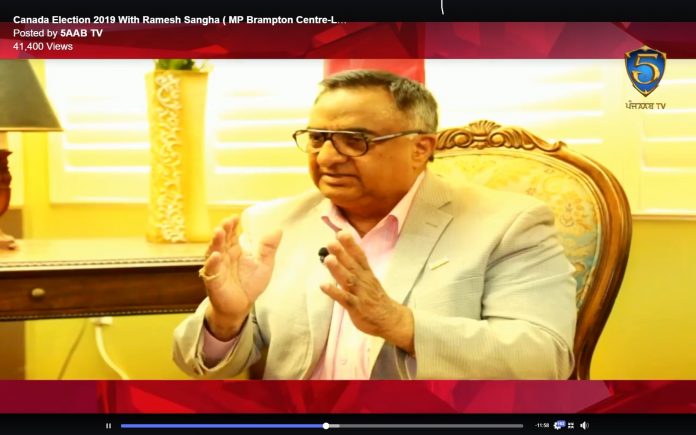 REMARKS by Ontario Liberal MP Ramesh Sangha (Brampton Centre) in a recent Punjabi-language 5AAB TV interview has revived the controversy about the Liberal Party “pandering” to Khalistanis who want their own independent state in India.

Sangha was asked what he had to say about the Punjab chief minister’s accusation that Prime Minister Justin Trudeau has a “soft corner” for Sikh separatists or Khalistanis. He said that India does its own investigations, however, there was no doubt about it that the Liberal Party has been “pandering” to Khalistanis.

Sangha pointed out that if people raised anti-India slogans or talk of division of India on some ground, ultimately India-Canada relations were bound to suffer.

But Sangha noted that Trudeau had said very firmly that “we do not want to divide India and that “we want a united India and we will work for it.”

He said some Sikh ministers and MPs had their own views about supporting Khalistanis. Consequently, India also adopts “a hard view” on this issue. He said that in such a situation, he as chairperson of a Canada-India friendship group could not do anything “to bridge this gap.”

He said that he objected to the use of “Sikh terrorism” in the controversial Public Safety report, because the Sikh religion is a religion of peace.