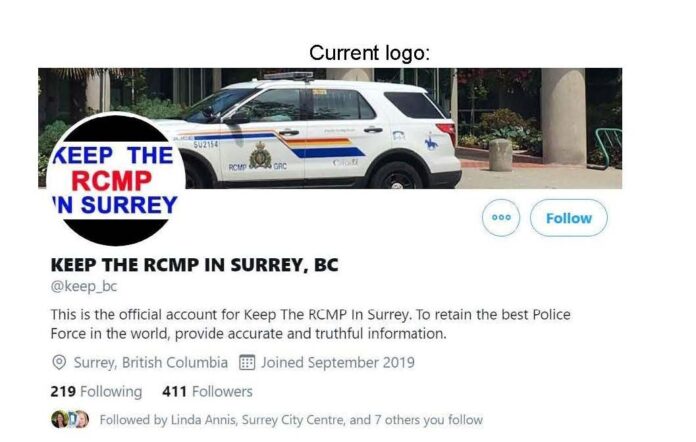 Surrey RCMP Chief Brian Edwards and his officers were either turning a blind eye to this illegal use of logo – or sleeping on the job!

However, the group is still using the RCMP cruiser with the force’s logo!

HOW can residents of Surrey expect Surrey RCMP Assistant Commissioner Brian Edwards and his officers to protect them when they didn’t even notice that their sacred logo was being used illegally by the “Keep The RCMP In Surrey” group so blatantly all this time to lobby for the force?

Was it deliberate bias – or was it a lack of intelligence? In either case, this has been a total disgrace that has sullied the name of the RCMP and its supporters. How can residents expect them to uphold the law in an unbiased manner?

It was only after MediaWaves Communications’ Ashiana Khan exposed this blatant misuse by this lobby group and The VOICE took up this cause stridently on Tuesday that the RCMP’s top brass apparently ordered the group to remove the logo from their twitter account.

However, the group is still using an RCMP cruiser with the RCMP logo on their twitter and Facebook accounts. Will the RCMP bosses do something about this? If not, then everybody – including gangs – should start using these symbols on whatever they want to.

As The VOICE wrote on Tuesday in an article titled “RCMP’s racism against South Asians in Surrey shows why Surrey Police Service must replace it”:

“The pro-RCMP forces in Surrey have been mocking South Asians and taunting them with comments on social media such as “what about a new delhi force …?” Some other comments are too disgusting to mention.

“These pro-RCMP forces have used the most vulgar language possible in attacks on Surrey Mayor Doug McCallum and others. They have resorted to personal attacks in the most disgusting way possible. Their emails to politicians and officials are rude and insulting and threatening – and many recipients have complained to us.

“Now with the steady progress in the formation of the Surrey Police Service and with more and more RCMP officers preparing their resumes to apply to the new force, these forces are in a state of panic and are getting increasingly aggressive.

“Surely, the RCMP top officers in Surrey are well aware of all this, but like cowards have kept their mouths shut – but South Asians won’t any longer!”