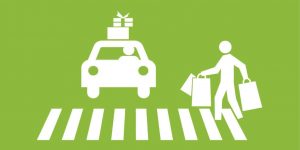 AS the holiday shopping season officially kicks off this week for Black Friday, ICBC is asking drivers to prioritize safety over finding the perfect parking spot. About 150,000 crashes happened in parking lots last year resulting in 5,400 injuries. (Count includes incidents in parking lots or near parking lots, e.g. exiting from a parking lot. Rounded to the nearest thousand.)

While most parking lot crashes happen at low speeds and only result in vehicle damage, dealing with the aftermath of a crash is the quickest way to turn anyone into a Grinch. ICBC receives hundreds of thousands of vehicle damage claims every year, with costs exceeding $1.5 billion.

Although some mistakenly believe that driving in parking lots is ‘safer’ due to lower travel speeds, ICBC says drivers need to continue practicing their safe driving habits, even while travelling in parking lots. Parking lots present drivers with unique challenges such as increased congestion and heavy pedestrian activity. The holiday season could add a layer of distraction with people more apt to be preoccupied with their shopping list or finding a parking spot.
Drivers are encouraged to apply a bit of holiday cheer, be courteous and have a bit more patience during this time of year with these Drive Smart tips from ICBC:

The rules of the road still apply, even on private property: Drivers should know that the law still applies, even in mall parking lots. Avoid cutting diagonally through a lot – travel only in the appropriate lanes. Don’t use your phone while driving, instead, program your navigation or holiday tunes before you start your car.
Have your car facing out in your parking spot: This position is safest for drivers because it helps you avoid the risk of reversing into a lane with potential blind spots when leaving.
Park further away, if you can: Instead of circling endlessly to get a spot that’s closest to the mall entrance, pick a spot that’s further away. You’ll avoid a high-traffic area where you’re more likely to crash with another vehicle or hit a pedestrian.
Slow down and be on alert: Drivers should drive slowly in parking lots to have enough time to react to an unexpected vehicle backing out of their parking spot or an unanticipated pedestrian, especially young children, who may be harder to see.
Pay attention to the arrows and stop signs: Many parking lots are quite narrow, restricting certain lanes to a single direction. Pay attention to the signs and markings on the road to avoid getting into a crash.
Don’t block traffic: Deciding to follow a shopper, then waiting for them to load their car, buckle up and leave, jams up traffic behind you and likely takes you much longer than if you had just found a spot further away. Sitting idle in a lane can leave you vulnerable to a collision, and you could be blocking other drivers who are trying to leave.

Let it go: No sense in having a showdown with another driver for a parking spot. Move along, and maybe that good karma will net you something really nice this season.

Drivers are encouraged to take the Drive Smart Refresher test at icbc.com/drivesmart. Other resources to help improve driving knowledge, such as driving guides, and a road signs practice test, are available on icbc.com.