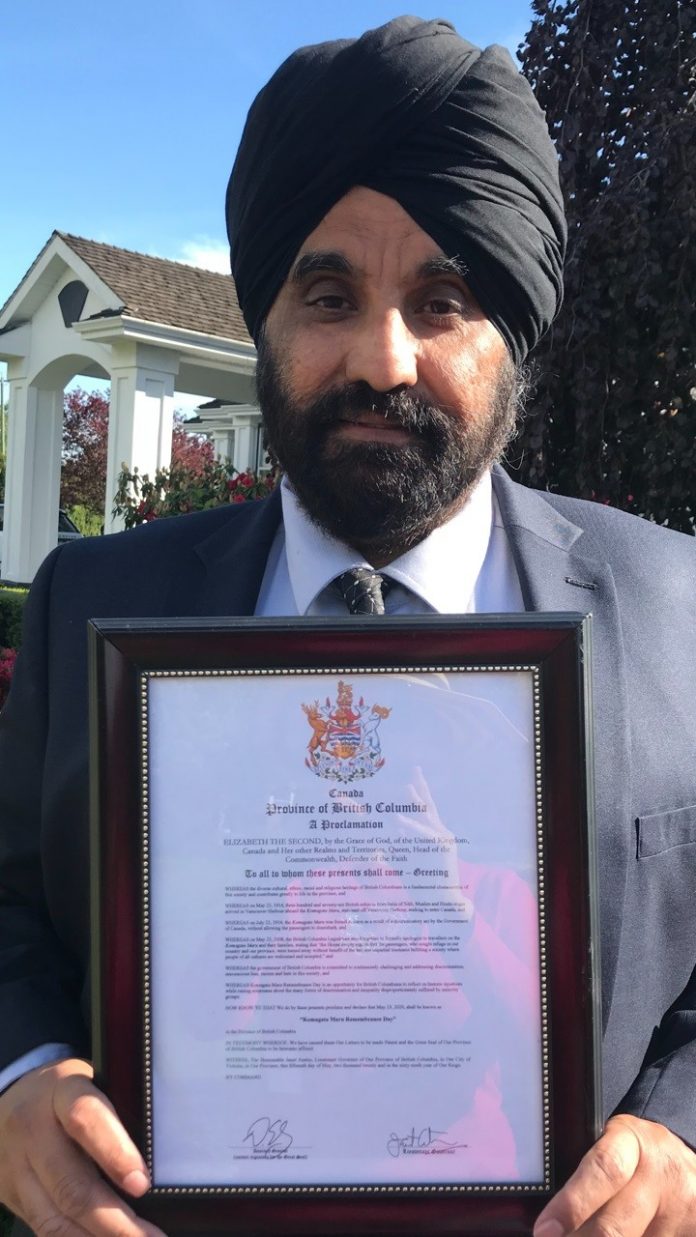 The proclamation was requested by Raj Singh Toor (see photo), Vice-President and Spokesperson for the Descendants of the Komagata Maru Society.

Toor thanked Premier John Horgan and the B.C. Government for the honour.

ELIZABETH THE SECOND, by the Grace of God, of the United Kingdom, Canada and Her other Realms and Territories, Queen, Head of the Commonwealth, Defender of the Faith

To all to whom these presents shall come – Greeting

WHEREAS the diverse cultural, ethnic, racial and religious heritage of British Columbians is a fundamental characteristic of this society and contributes greatly to life in the province, and

WHEREAS on May 23, 1914, three hundred and seventy-six British subjects from India of Sikh, Muslim and Hindu origin arrived in Vancouver Harbour aboard the Komagata Maru, stationed off Vancouver Harbour, seeking to enter Canada, and

WHEREAS on July 23, 1914, the Komagata Maru was forced to leave as a result of a discriminatory act by the Government of Canada, without allowing the passengers to disembark, and

WHEREAS on May 23, 2008, the British Columbia Legislature stood together to formally apologize to travellers on the Komagata Maru and their families, stating that “the House deeply regrets that the passengers, who sought refuge in our country and our province, were turned away without benefit of the fair and impartial treatment befitting a society where people of all cultures are welcomed and accepted,” and

WHEREAS the government of British Columbia is committed to continuously challenging and addressing discrimination, unconscious bias, racism and hate in this society, and

WHEREAS Komagata Maru Remembrance Day is an opportunity for British Columbians to reflect on historic injustices while raising awareness about the many forms of discrimination and inequality disproportionately suffered by minority groups;

NOW KNOW YE THAT We do by these presents proclaim and declare that May 23, 2020, shall be known as

in the Province of British Columbia.

IN TESTIMONY WHEREOF, We have caused these Our Letters to be made Patent and the Great Seal of Our Province of British Columbia to be hereunto affixed.

WITNESS, The Honourable Janet Austin, Lieutenant Governor of Our Province of British Columbia, in Our City of Victoria, in Our Province, this fifteenth day of May, two thousand twenty and in the sixty-ninth year of Our Reign.