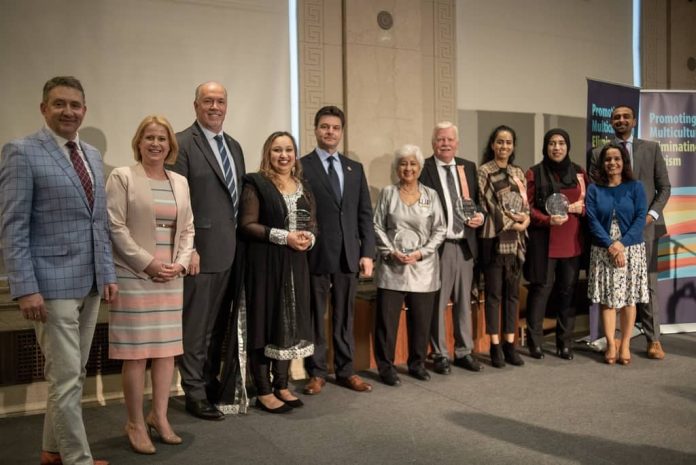 FIVE British Columbians were honoured for their work to end acts of racism and promote cultural inclusion at the Multiculturalism and Anti-Racism Awards.

“Diverse and inclusive communities are strong communities,” said Premier John Horgan. “Congratulations to these remarkable individuals and organizations, who are working to end racism and discrimination, and make sure every person feels welcome to participate in B.C.’s economy, culture and society. Their actions are helping build a better B.C. for us all.”

The B.C. Multiculturalism and Anti-Racism Awards celebrate British Columbians for excellence in promoting multiculturalism and addressing racism. Each year, members of the public nominate individuals, organizations and businesses whose outstanding work has strengthened inclusion and cultural diversity in their communities.

The ceremony took place on the International Day for the Elimination of Racial Discrimination and featured special performances in recognition of Nowruz, the Persian New Year, and Holi and Hola Mohalla, the Hindu and Sikh celebrations of spring.

“We’re at a critical moment in history where acts of racism and hatred are increasing, across the world and here at home in B.C.,” said Ravi Kahlon, Parliamentary Secretary for Multiculturalism and Sport. “We must stand together against those who seek to divide us and recognize that we each have the power to create a more inclusive society for everyone. The exemplary people recognized by these awards are creating the change that we need for a more just and inclusive society.”

Nada El Masry (New Westminster):
Manager at RADIUS SFU at Simon Fraser University and a team member for the Beyond Borders project, which is focused on addressing themes of civic engagement, inclusion and systemic barriers to thriving livelihoods for refugees in Surrey.

Annie Ohana (Surrey):
Founder of Mustang Justice, a youth social justice leadership program, which focuses on support for cultural revitalization projects, interfaith dialogue and the protection of cultures facing oppression in their home countries.
Dalvir Nahal (Vernon):
Founder of the Bollywood Bang, dedicated to increasing awareness of Sikh culture and history by breaking down cultural barriers in the Okanagan to fight racism.

Spice Radio (i.t. Media Broadcasting) for organizing the annual campaign, Raise Your Hands Against Racism. Since 2015, this annual event has taken place during the Indian holiday Holi. Spice Radio is also involved in promoting anti-racism messages through radio broadcast, print and television that encourage Canadians to take a stand against racial injustice.

* British Columbia has the largest proportion of ethno-cultural diversity in Canada:
* B.C. is home to 204 First Nations and vibrant urban Indigenous and Métis communities.

* 36% of British Columbians identified as a visible minority or Indigenous in the 2016 census (51% in Metro Vancouver).

* On Nov. 1, 2018, government introduced legislative amendments to the Human Rights Code that will re-establish a human rights commission for B.C. to promote and protect human rights for all British Columbians.