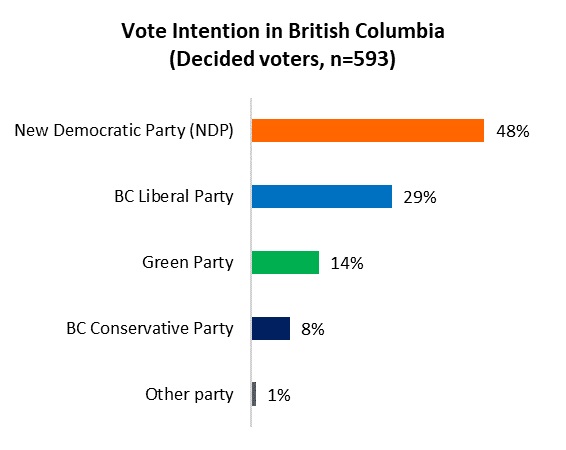 NEW data from the non-profit Angus Reid Institute finds that an early election would present Premier John Horgan and the NDP with quite the irresistible opportunity, should they choose to take it.

The New Democrats have opened a whopping 19-point lead over the opposition BC Liberals, with half of residents (48%) saying they would cast votes for the party that has helmed a minority government for three years. The BC Liberals take 29 per cent of the decided and leaning vote, while the B.C. Greens are at 14 per cent of current vote intention.

However, fully one-in-three B.C. residents say they would not be comfortable heading to the polls in person this fall as they would during a normal year, due to concerns about the coronavirus. BC NDP supporters feel this more acutely than those who support other parties, with two-in-five New Democrat supporters saying they would be uncomfortable going physically to the polls.