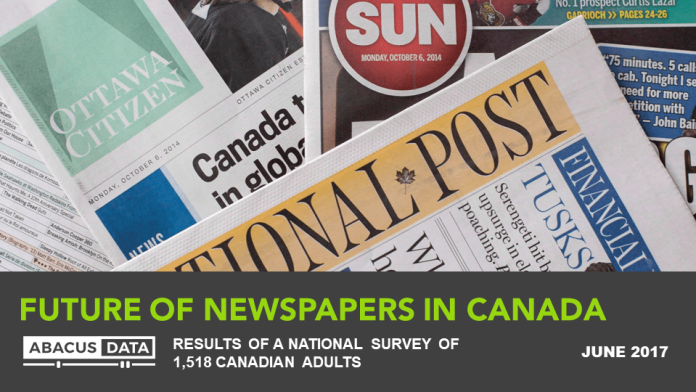 FOR the last few years, there have been clear signals that Canada’s newspaper industry is struggling and some newspapers may end up in bankruptcy. In our most recent survey, we asked a few questions to get a sense of how people are feeling about this. Here’s what we found:

Millennials (51%) were more likely to want some government action compared to Boomers (38%) but opinion is clearly split no matter what the age group.

Opinion on government intervention is a bit different depending on political affiliation. NDP voters are evenly split (51%-49% in favour of action), Conservatives opposed (66%-34%) and Liberals in between, but leaning laissez faire (55%-45%).

“Newspaper bankruptcies, should they occur, may have a more severe impact on the amount and the quality of information than Canadians imagine will be the case.

“Because people consume information using a variety of digital platforms, they may not be as aware as used to be the case of the sources of their news, and the important role of local newspapers in newsgathering. It’s also possible that they believe that different media outlets will fill in the gaps that would occur with newspaper failures, using different business models.

“The biggest takeaway thought is that many people seem to shrug at what could be seismic events in the history of Canadian newspapers. On the question of whether government should act, people seem a little bit more concerned about what could go wrong with government intervention, rather than demanding some sort of solution.”