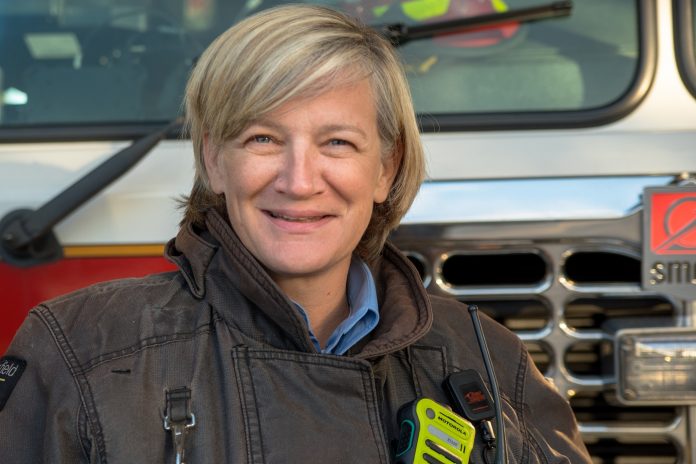 IN 1992, Nancy Innes was playing and coaching basketball at SFU when she saw a recruitment flyer for the Surrey Fire Service (SFS). The then 26-year-old student applied and soon realized women firefighters were a rarity. In fact, at that time, there was no glass ceiling to break because there were no full-time female fire fighters in the Metro Vancouver area. On September 14, 1992, Nancy Innes became the first of two full-time female fire fighters to join the Surrey Fire Service and eventually rising to the rank of Fire Suppression Captain.

“Women fire fighters are not uncommon today, but 27 years ago they were non-existent in Lower Mainland fire departments,” said Surrey Mayor Doug McCallum. “Nancy Innes is truly a trail blazer and inspiration for women who want to make a career out of firefighting. I want to congratulate Captain Innes for the long, distinguished and groundbreaking career she has had with our Surrey Fire Service.”

The Surrey Fire Service says it is proud of its progressive and barrier-free approach to its recruitment.

“I want to commend Captain Innes for her contributions to the Surrey Fire Service,” said Fire Chief Larry Thomas. “Nancy is proof that women can have long and fulfilling careers as fire fighters. As Nancy moves into a well-earned retirement, I know her pioneering work will inspire other women to fill her place within the ranks of the Surrey Fire Service.”

Currently, the SFS has 40 women in its uniformed ranks in roles ranging from frontline firefighting and dispatch to assistant fire chief. The SFS offer “Women in Firefighting” workshops designed to enhance recruitment of women to the fire service.