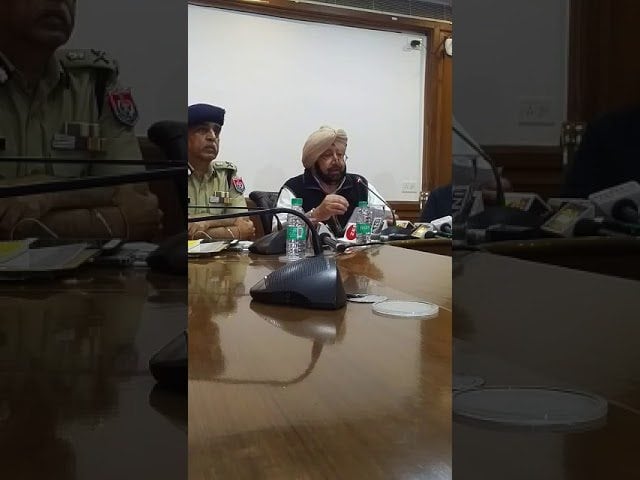 The Punjab police on Tuesday claimed to have solved most of the cases of targeted killings, including the shooting of RSS leader Jagdish Gagneja last year, with the arrest of four persons.
Punjab Chief Minister Amarinder Singh claimed that a major conspiracy to fan communal disturbance and destabilize the state was hatched by Pakistan’s ISI [Pakistan’s CIA].
Though the Punjab government had handed over the case of the killing of RSS state vice president Brigadier (retired) Jagdish Gagneja to the CBI, the state police cracked the case with the busting of a terror module, the eighth such module to be busted since the Congress came to power in the state, he said.
Citing the police probe and interrogation of suspects, the chief minister said the killing of another RSS leader, Ravinder Gosain, last month, had also been solved with these arrests, which had been linked to most of the cases of targeted killings in Ludhiana, Khanna and Jalandhar since January last year.
Those arrested include a gangster, Dharmendra alias Guggni, lodged in Nabha jail, further endorsing the suspicions of a growing nexus between radicals and gangsters, the chief minister claimed.
He said the interrogation of the four conspirators showed that they had met and been trained at various places abroad and had been using encrypted mobile software and apps for communication with handlers based in Pakistan and some western countries.
“The ISI was always looking to disturb the country’s peace and radicalise the youth,” said Amarinder Singh in response to a question and asserted that the state government would not allow the peace and harmony of Punjab to be disrupted.
He said it was evident from the investigations that the targeted killings were aimed at fanning communal disturbance to further ISI’s “anti-India” game plan since there were strong “indications” of an active involvement of Pakistani intelligence operatives based on Pakistani and foreign soil.
Three of the suspects have been identified as Jimmy Singh (a Jammu resident who recently returned to India from the UK after spending many years there, and was picked up a week ago from Delhi’s IGI airport), Jagtar Singh Johal alias Jaggi (a UK national who got married last month and was apprehended from Jalandhar), Dharmender alias Guggni (a gangster from Meharban in Ludhiana who allegedly supplied weapons to the killer).
The fourth accused, who was allegedly the main shooter in various cases, was caught Tuesday and details of him could not be disclosed at this juncture as his interrogation was still continuing, said the chief minister, adding that the police had both forensic and ballistic evidence against him.
The police were on top of the cases, Singh said, adding that he had directed the Director General of Police (DGP) to work out a system of awards and rewards for the police team that had busted this module and for future too.
While he could not completely rule out such incidents in the future in view of Punjab being a border state, with international conspirators working against it, DGP Suresh Arora, Punjab’s top cop, assured the people of the state that they were in safe hands of the Punjab police.
The DGP attributed the success in busting the terror module to the team effort of the intelligence and counter- intelligence wings as well as the district police of Batala and Moga.
The team consisted of IG Intelligence Amit Prasad, DIG Counter-Intelligence Ranbir Khatra, SSP Moga Ranjit Singh, SSP Batala Opinderjit Ghuman, SP Rajinder Singh, SP Wazir Singh, DSPs Sulakhan Singh and Sarabjit Singh, Inspector Kikar Singh and ASI Haripal.
- Advertisement -
Trending