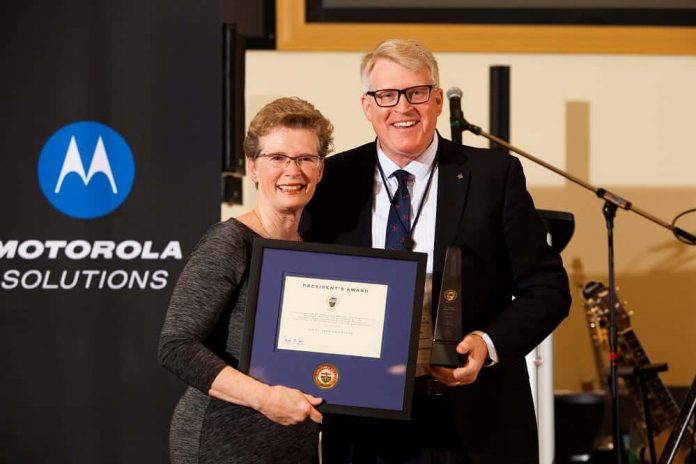 THE Ontario Association of Chiefs of Police (OACP) has named Chief Jennifer Evans as the 2018 recipient of the OACP President’s Award of Merit, the association’s highest award. The President’s Award of Merit recognizes an OACP member who has demonstrated outstanding dedication and support to the association.
“Throughout her career, Chief Evans has demonstrated a passionate commitment to her community, her police service, and policing in Ontario and Canada,” said Chief Bryan Larkin, OACP President. “Her accomplishments speak for themselves. Chief Evans’ commitment for delivering effective policing is balanced by her compassion for people. As a past President of our association and a Director on the Canadian Association of Chiefs of Police’s Board of Directors, she has made policing better.”
“I am honoured to receive this prestigious award and would like to thank OACP President, Chief Bryan Larkin, for selecting me as the recipient,” said Evans, “I am very proud of the work the OACP does to ensure law enforcement in this province remains committed to providing effective policing and ensuring our communities remain safe. It is a pleasure to be recognized for my contribution to the success of this association by my peers, and I want to say thank you for their support.”
Evans began her career with Peel Regional Police in 1983 when she joined as a cadet. Since that time, she progressed through the organization with notable assignments, include the Uniform Branch, Youth Bureau, and the Criminal Investigations Bureau. In 1996, she assisted Justice Archie Campbell in the review involving serial rapist and murderer Paul Bernardo and later accepted a two-year secondment to work as a Violent Crime Analyst at the Provincial ViCLAS Centre in Orillia.

Evans also worked throughout Ontario for the Office of the Chief Coroner as an investigator and conducted several in-custody death investigations that were subject to mandatory inquests. Upon her return to Peel Regional Police, she worked as a detective in Homicide and Missing Persons Bureau and as the Inspector-in-Charge.
Evans was promoted to Deputy Chief of Police in 2008. In October 2010, she was seconded to conduct a review of the Missing Women Investigations in the Lower Mainland in British Columbia. She reviewed thousands of documents and conducted numerous interviews with police officers involved in the initial investigation of Robert Pickton prior to his arrest in February 2002. In January 2012, she testified at the Missing Women Commission of Inquiry regarding her report. Evans’ knowledge and experience is recognized both provincially and nationally.
On October 12, 2012, she was appointed as Chief of Peel Regional Police. She was appointed to the Order of Merit of the Police Forces by the Governor General of Canada in 2013 and served as President of the OACP for 2014-15.

Peel Regional Police Chief on gun violence: “This is not the new norm for me or for my officers”