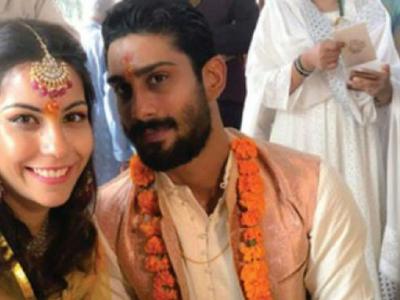 The duo, who was dating since past one year, formalised their relationship at a ceremony at Sanya’s farmhouse in Lucknow.

Prateik issued a statement, sharing the news of his engagement.

“I have always been a very guarded person when it involves my private life. Infact I went down on one knee and proposed to Sanya at Time Out 72 music festival in Goa in December and no one knew about it till she brought it up with her parents.

“Since my grandfather passed away last year, we wanted to keep the festivities low key and hence will plan the wedding only next year,” he said.

Calling the engagement the happiest day of his life, Prateik said Sanya has brought a lot of stability in his life.

“Yesterday (Monday) was the happiest day of my life as Sanya brings a lot of stability and fortune into my life and I am someone who has always endorsed the idea of wedlock and brood,” the actor said.

The couple has known each other for eight years now, but got together only in 2017 after Sanya returned from London in January having completed a year-long post-graduate course from Goldsmiths, University of London, with specialisation in filmmaking.

Prateik is planning to hold separate functions in New Delhi, Lucknow and Mumbai post the nuptials in 2019.

On the professional front, the 31-year-old actor is set to return to the silver screen this year with two big ticket projects, Ahmed Khan’s “Baaghi 2”, co-starring Tiger Shroff and Disha Patani and Anubhav Sinha’s social thriller “Mulk” with Rishi Kapoor and Taapsee Pannu.