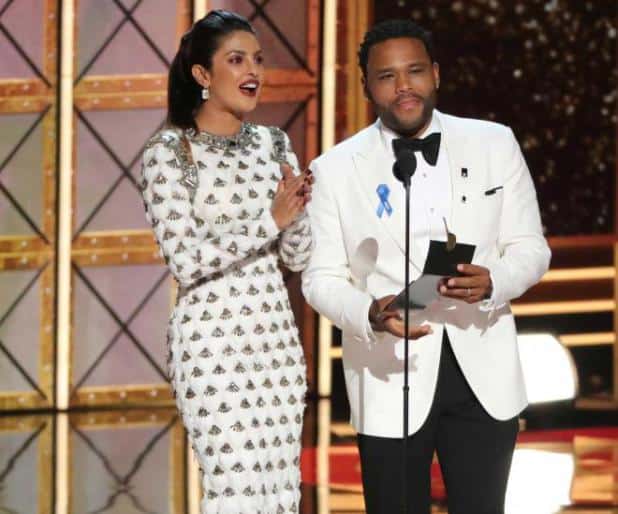 Los Angeles (PTI): Priyanka Chopra was a vision in white as she made her second red carpet appearance at the Emmys in a Balmain feathered dress.

The 35-year-old “Quantico” star, who twirled her way to the good books of fashion critics last year with flowy Jason Wu red dress, nailed the red carpet this time as well with a shimmery white full-sleeved, self-quilted number and fierce make-up.

Even though the dress was not as sexy as what Priyanka had worn in the past, it was a perfect blend of elegance and power, courtesy the gorgeous embellished, power-shoulders and neckline.

Priyanka wore her hair in a sleek ponytail and her make up had a sensual touch with deep berry on her pout and smokey eyes.

White seems to be Priyanka’s favourite red carpet colour, as it is the third time in the row she has picked dresses in the shade for a major event.

The actor opted for a nude-white Zuhair Murad gown for her first Oscars appearance and repeated the colour with a beautiful Ralph & Russo tulle strapless gown at the 89th Academy Awards.

Priyanka, who started her career in the West with ABC TV series “Quantico”, made her Hollywood acting debut this year with “Baywatch”.

The actor will soon start filming the third season on the show. She will also be seen in two more Hollywood films – “A Kid Like Jake” and “Isn’t It Romantic?”.