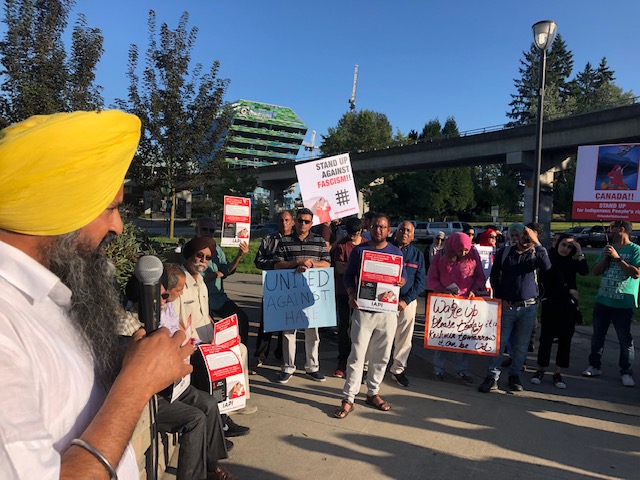 SOUTH Asian activists came together to raise their voices against what they said was growing repression on the people of Kashmir by the Indian forces at a rally held in Surrey on Sunday, August 18.

Organized by the members of Indians Abroad for Pluralist India (IAPI), the rally was in response to the recent controversial decision of the Indian government led by right wing Hindu nationalist Bhartiya Janata Party (BJP) to revoke special status granted to Kashmir, which is a Muslim majority state in India, and detain its leaders to suppress the liberation movement. The action was taken without any debate in the parliament or consultations with the people of the disputed territory.

A significant number of Kashmiris joined the rally where speakers unanimously condemned the BJP government’s decision and expressed their solidarity with the people of Kashmir who have been fighting for right to self-determination. The Sikh activists also came out in big number to show their support. The speakers demanded the Canadian government to intervene and speak out against human rights abuse in Kashmir. Postcards addressed to Canadian Prime Minister Justin Trudeau asking him to break his silence were signed by many during the event. The speakers were upset at a weak statement issued by his government on the issue.

Harpreet Singh – who is a candidate for the opposition Conservative Party for Surrey Newton spoke on the occasion. Singh, who is also an independent TV broadcaster, is very vocal against growing attacks on religious minorities in India and consistently speaks against human rights violations.

Former New Democratic MP and a strong advocate for human rights Svend Robinson had sent his statement in solidarity with the people of Kashmir that was read out by his party colleague and candidate for Surrey Fleetwood-Port Kells Annie Ohana. Another NDP nomination candidate Stephen Crozier joined her on the occasion. However, the speakers at the rally criticized the MLAs from BC NDP government for remaining silent on the issue.

Slogans against the BJP government were raised at the event that started with a moment of silence for 63 victims of a terror attack in Kabul. Islamic State had claimed responsibility for the suicide bombing that took place in a Shia dominated area and left 180 people injured.