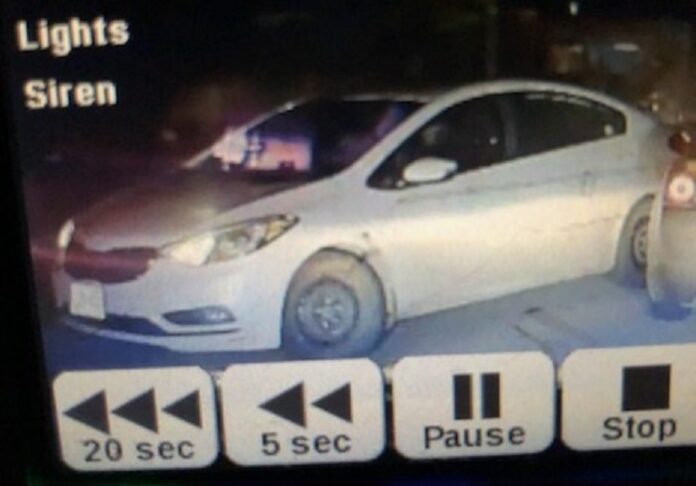 RCMP in the South Okanagan are requesting the general public for information after a Penticton RCMP officer was allegedly assaulted while performing a traffic stop in the city early Monday morning.

On September 28, at approximately 12:30 a.m., a frontline Penticton RCMP officer was conducting a traffic stop with a vehicle in the alleyway of Latimer Street, between Wade Avenue and Orchard Avenue, when a vehicle unrelated to the traffic stop backed into the passenger vehicle pulled over by police.

The suspect vehicle suddenly pulled forward, struck the uniformed police officer, sideswiped the marked police vehicle and fled the area. The driver of the passenger vehicle was not injured, while the police officer was transported to hospital with non-life-threatening injuries.

Investigators believe that the suspect vehicle, a white Kia Forte, had been reported as stolen on September 26 in Kelowna’s Rutland area.

Shortly before 7 a.m., Osoyoos RCMP was dispatched to a vehicle fire in a wildland area near Fairwinds Drive. Frontline officers discovered the stolen Kia Forte. Another vehicle, a dark blue late 90’s Nissan pickup truck, was reported to police as stolen from a nearby location.

A short time before 11:30 a.m., Osoyoos RCMP were called to a local motel where the stolen Nissan pickup truck was found abandoned.

Anyone with any additional information about any of these incidents, or anyone with video surveillance footage that may aid investigators, is urged to call the Penticton RCMP or Osoyoos RCMP, or remain completely anonymous by calling CrimeStoppers at 1-800-222-8477.

RCMP are also releasing an image captured by a camera in the police officer’s car which shows the white Kia Forte, in hopes that it will further advance the inter-jurisdictional investigation.