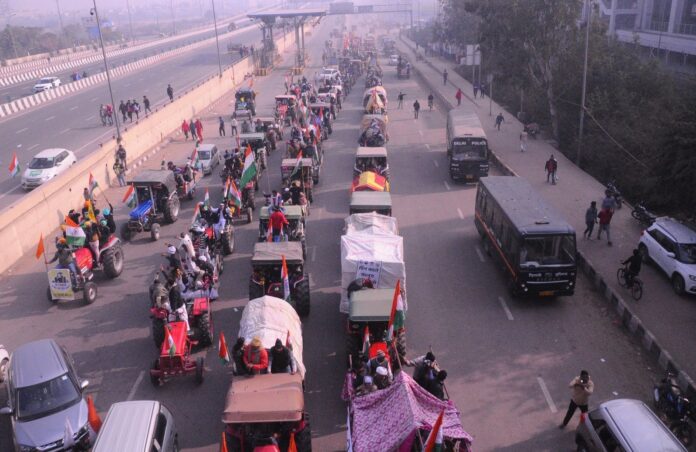 New Delhi (IANS): The Samyukta Kisan Morcha (SKM), an umbrella body of farmers’ unions protesting against the three Central farm laws, has condemned the violence that broke out in the national capital during the ‘Kisan Gantantra Parade’ organised on the occasion of Republic Day on Tuesday.

The leaders of famers’ unions under the aegis of SKM said in a statement, “We thank the farmers for the unprecedented participation in today’s Farmers Republic Day Parade. We also condemn and regret the undesirable and unacceptable events that took place today and dissociate ourselves from those indulging in such acts.”

“Despite all our efforts, some organisations and individuals have violated the route and indulged in condemnable acts. Anti-social elements had infiltrated the otherwise peaceful movement. We have always held that peace is our biggest strength, and that any violation would hurt the movement,” it added.

“We dissociate ourselves from all such elements that have violated our discipline. We appeal strongly to everyone to stick to the routes and norms of the parade, and not indulge in any violent action or anything that taints national symbols and dignity. We appeal to everyone to desist from any such acts,” the statement said.

The SKM has been trying to get a full picture of all the events with regard to the several kisan parades that were planned on Tuesday and will share a detailed statement soon.

Earlier in the day, groups of farmers indulged in vandalism as scores of them reached the Red Fort after deviating from the set route for the rally. After violent incidents, the SKM called off the Republic Day tractor rally and appealed to the protesters to immediately return to their respective protest sites.

OPINION: Farmers and producers must be treated fairly and given support they need