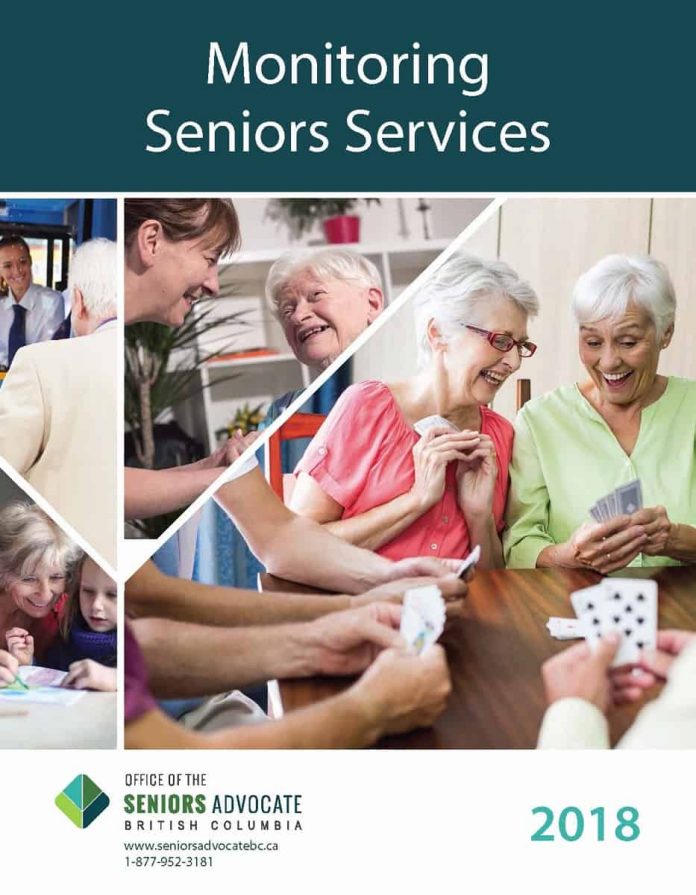 THE annual report Monitoring Seniors Services 2018 released on Wednesday by Seniors Advocate Isobel Mackenzie shows that the number of seniors using property tax deferral in 2017/18 has risen 53% since 2013/14, with a 21% increase in the last year alone.

Some other highlights of the 2018 report include:
– The rent subsidies through the Shelter Aid for Elderly Renters (SAFER) program continue to grow beyond the rate of the target population. There was a 7% increase in the number of SAFER recipients with 22,956 seniors receiving the supplement and a 34% increase in the aggregate amount paid for a total of $71 million in SAFER subsidies paid.
– The number of seniors receiving home support service decreased by 1.4% despite a 4% increase in the population over age 65 and a 5% increase in the population over 85. For those who did receive service, more hours were delivered as the total number of hours delivered remained about the same (less than 1% increase) resulting in a 2% increase in the average hours of care.
– Adult Day Program (ADP) access continued to decline. There has been a 6% reduction in the number of ADP clients over the past two years with 2.8% in the last year alone, leaving a total of 5,895 ADP clients. This is coupled with an 17% reduction in the number of ADP days in the last two years (3.8 % reduction in the last year) telling us that the clients remaining are also receiving fewer days than in previous years (total of 217,990 ADP days). Not surprisingly there is a 23% increase in the wait list for ADP.
– There is a 2% decrease in publically subsidized registered assisted living units, but a 7% increase in privately funded registered assisted living units.
– Long Term Care facilities saw a 2% reduction in turnover with an 8% reduction in new admissions. Despite this, three health authorities experienced a reduction in the median length of stay.
– With 1,379 people awaiting placement, waitlists as of March 2018 were 7% longer than March 2017 but 23% shorter than September 2016.
– The percentage of seniors admitted to a care facility within 30 days rose to 71%, a 16% increase from the previous year. However, the rate varies between health authorities, from a low of 45% ( Island Health) to a high of 90% (Vancouver Coastal).
– The increase in property offences against seniors continues to rise. While only a 1% increase this year, for a total of 16,244 offences, there is a consistent and persistent trend that shows a 30% overall increase in property offences against seniors in the last four years.
– The Seniors Abuse and Information Line (SAIL) saw a 12% increase in the number of calls received but a slight decrease (2%) in the number of calls related to elder abuse.
– The Public Guardian and Trustee saw fewer Committee of Estate orders with a 5% decline this past year.
– First Link saw a 10% increase this past year. A program to support those with dementia and their family members First Link is delivered by the Alzheimer Society of BC and supports 15,922 active clients.
– Better at Home, a program delivered by the United Way of the Lower Mainland that addresses a number of the personal supports for seniors saw a 15% decrease in new clients.

Mackenzie noted: “As always this report highlights there are a significant number of supports for seniors, and while some services increased in tandem with the growing seniors’ population, others are not keeping up with demand.
“The cost of housing is affecting seniors as the number deferring their property taxes has grown exponentially. In addition, SAFER data show that seniors who rent are having a more difficult time as more are claiming the SAFER grant and they are receiving a higher subsidy-, telling us the gap between income and rent is growing.
“The reduction in home support clients is puzzling as we should be seeing these numbers increase. Recent announcements by the government on funding increases to home and community care are not reflected in these numbers as the effect of the increase has not yet materialized so hopefully we see this trend reversing next year.
“The ADP numbers are very concerning. However, the recent announcement by the provincial government for $75 million targeted to ADP and respite will hopefully have an impact. While these numbers do not reflect the increased funding they do speak to how desperately the funding increase was needed. ADP is often the lifeline for caregivers who are struggling to care for their loved one at home, and we need to make it more, not less accessible.
“It is encouraging to see an increase in the number of seniors placed in long-term care within 30 days of assessment although some families are waiting much longer and there is significant variation between health authorities. However many seniors especially those living in Vancouver Coastal are managing to find a bed within a reasonable time.
“It is certainly encouraging to see the number of families who access First Link increasing as well as seeing the continual decreases in the PGT Committee of Estate files; however the increase in property offences is of concern as seniors are particularly vulnerable. The decrease in Better at Home clients is a potential concern and we will continue to monitor.”

Mackenzie added: “My office will continue to work with all the various ministries, governments and service providers to ensure that we continue to try and improve the health and well-being of all seniors in B.C.”

Surrey Mayor Doug McCallum will freeze property taxes for the next...