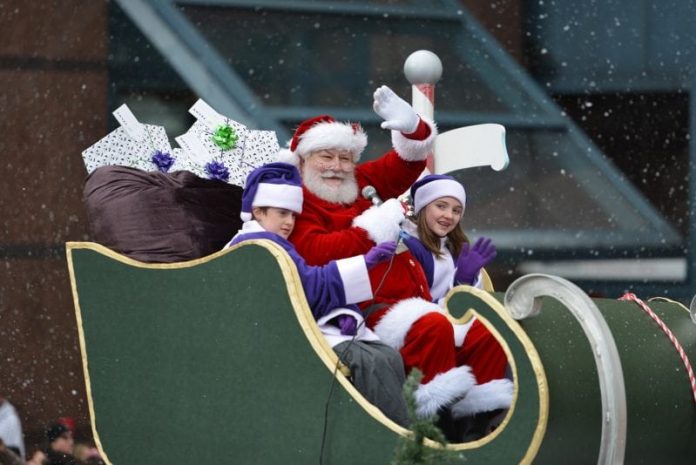 CHRISTMAS season in Vancouver officially got underway on Sunday (December 3) as 300,000 spectators turned out for Telus’ Vancouver Santa Claus Parade. The crowd that lined the 1.8-km route were entertained by more than 2,700 participants, including more than 60 marching bands, choirs, floats and community groups.
As little as six weeks ago, this year’s parade was at risk of being cancelled due to a lack of sponsorship support. To the delight of Christmas parade fans in Vancouver and across British Columbia, Telus stepped in to ensure one of the province’s most cherished holiday traditions could continue for its 14th consecutive year.

In addition to bringing the joy of the Christmas season to thousands of children and families along the parade route, the parade also celebrated the spirit of giving by generating much needed donations for those in need across the Lower Mainland through its support of the CKNW Orphans’ Fund and the Greater Vancouver Food Bank Society. This was the first year the parade supported the CKNW Orphans’ Fund, which is dedicated to enhancing the lives of children living with physical, mental and social challenges in B.C.

To support the Food Bank during a very busy time of year, Telus announced on October 24 that it would donate $1 to the Food Bank for every food item collected at a Telus store in the Greater Vancouver area before December 3, up to $20,000. On Sunday, Telus announced it would extend this year’s collection to December 31, and has tripled their donation to the Food Bank and will be donating $100,000.
In addition to the parade, the day’s festivities included a Breakfast with Santa event at the Fairmont Hotel Vancouver; a holiday entertainment zone at Christmas Square in front of the Vancouver Art Gallery which featured a Food Bank drop off, face painting, and Letters to Santa station; and an entertainment stage featuring live music by LeftCoast. Following the parade, families were treated to free photos with Santa at Telus Garden.

Christmas fans who were able to attend the parade, and spectators who would like to enjoy it again, will be able to watch a province-wide broadcast of the TELUS presents the Vancouver Santa Claus Parade on Global BC and BC 1 later this month.