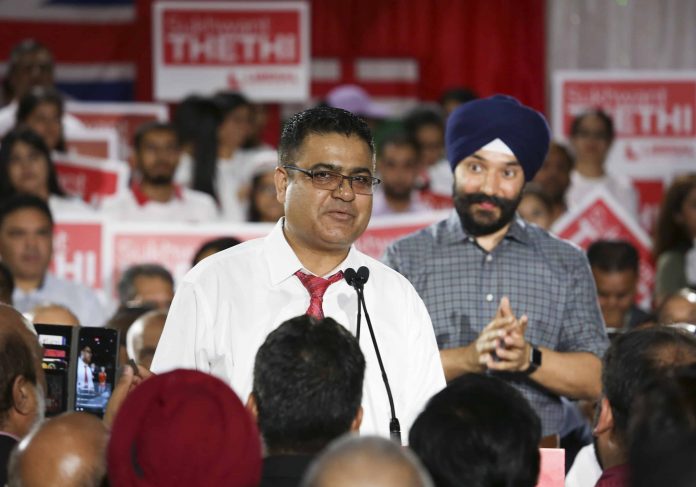 BRAMPTON: Community leader Sukhwant Thethi was nominated on Saturday (July 22) to stand as the Ontario Liberal candidate for Brampton South in the next provincial election.

Thethi accepted the nomination surrounded by his family, hundreds of local supporters, Ontario Premier Kathleen Wynne, Ontario Minister of Finance Charles Sousa, Ontario Minister of Seniors Dipika Damerla and federal Minister Navdeep Bains. In his speech to supporters, Thethi spoke passionately about his experiences as a new Canadian, the Ontario Liberal plan that is building a better, fairer province and the shameful things that Patrick Brown’s PCs are saying about Sikh candidates behind closed doors.

“I moved here in 1995 from India and waited tables. From an immigrant waiting tables to a successful banker standing here to run to be a Member of Provincial Parliament — this is what Canada is all about,” Thethi said.

He added, “I look at Kathleen Wynne’s Liberal plan and I see the policies that will help even more people realize their dreams and seize opportunity, just like I did. As the father of two daughters in university, I know that by making college and university tuition free, the Ontario Liberal plan is going to help hundreds of thousands of young people secure their future.” Referring to the recent actions Ontario’s Liberal government has taken to deliver faster, better health care, new transit, a higher minimum wage and better protections for all workers, Thethi said, “This Premier and her team are implementing a plan that supports our families and creates more fairness for people in Brampton and across Ontario.”

In enthusiastically welcoming Thethi to the team, Wynne touched on aspects of Thethi’s life story, saying “Sukhwant knows what it is like to work your way to a better life in a new country. And I know how valuable it is to bring his perspective and ideas to Queen’s Park. One third of our team of Liberal MPPs were born outside of Canada. Every day I see how their different experiences help us in our quest to make life better for Ontario families. Sukhwant will be a strong voice for Brampton and a great help as we continue to fight for fairness and build Brampton up with the new transit, hospitals, schools and university campus that this exciting, growing community needs.”

Thethi also took aim at the recent Conservative nomination controversy in Hamilton, telling supporters it is now clear that Patrick Brown and his PCs will say anything to win votes from South Asians. Thethi was referring to an admission by the Conservative Party president that the PC Party blocked a turbaned Sikh candidate from winning the nomination in Hamilton because he was seen as “not reliable” and the “wrong demographic.”

Thethi strongly condemned this as yet another incident that shows the PCs are not the inclusive party they claim to be, saying, “Patrick Brown and his Conservatives pretend to reach out to the South Asian community when they want our votes, but this reveals their true colours. This is the kind of Conservative prejudice we must oppose. Whether you are a Sikh Canadian or a Muslim Canadian or someone whose family has been here for generations, there is no right or wrong demographic. We are all Canadians.”

Thethi immigrated to Canada from India in 1995. He has worked in food service, manufacturing, and owned a small business. He is now a mortgage specialist with the Royal Bank of Canada. Thethi believes strongly in giving back to the community that has given him so much opportunity. He volunteers and fundraises for causes that include the Peel Multicultural Council, the United Way, the Heart and Stroke Foundation, and other organisations working to improve local health care. He also serves on the advisory board to select Ontario Justices of the Peace. Sukhwant Thethi and his wife, Rajinder, are parents of two university-age daughters, Gurleen and Amarjot.