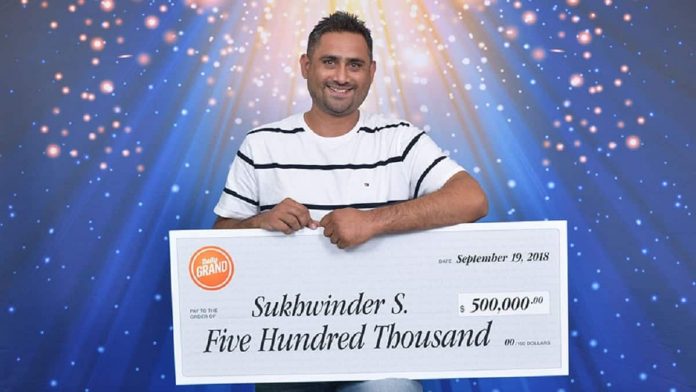 SURREY resident Sukhwinder Sidhu is smiling from ear to ear since learning he won $25,000 a year for life as part of the September 17 Daily Grand Bonus Draw promotion.

Sidhu discovered his win after checking his ticket using the Lotto! App. “I saw that it said $25,000 a year for life and I was a little surprised,” he said, noting that he immediately shared the good news with his wife. “She thought I was joking, but after seeing the numbers she was just as surprised as I was.”

Sidhu matched five out of five numbers to win one of the Bonus Draw prizes on the September 17 Daily Grand draw. He had the option to choose $25,000 a year for life or a lump sum of $500,000. He chose the latter so he could start enjoying his full prize immediately.

“I will be treating my family to a nice dinner and surprising my kids with some new toys and games,” Sidhu said. Additional plans include building a new house and taking some extra time off to spend with loved ones. “I moved to Canada over 15 years ago and life has been really busy ever since. I’m looking forward to taking it easy for bit,” he added.