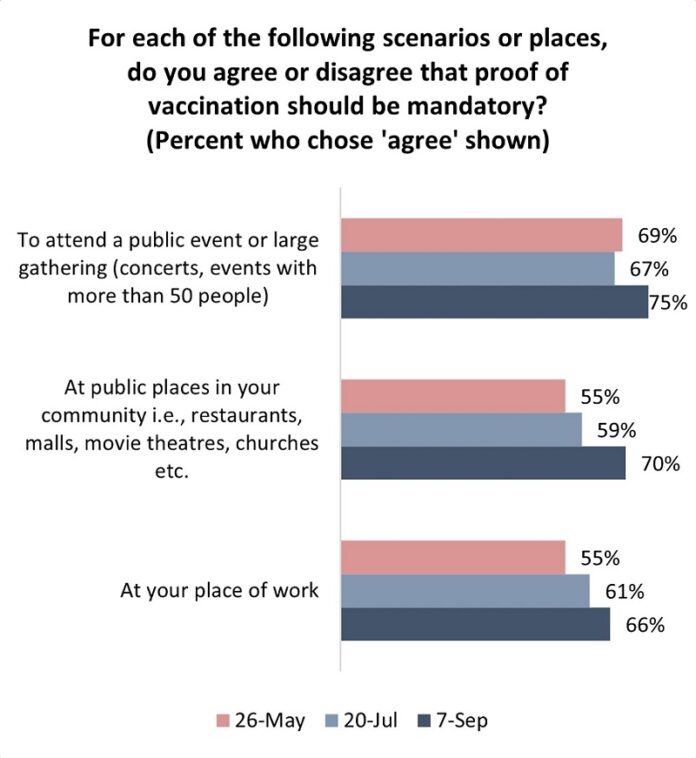 NEW data from the non-profit Angus Reid Institute finds rising support for mandatory vaccinations to enter public spaces as Canadians – the vast majority of whom are vaccinated – look for ways to end the fourth wave and the renewed restrictions that have accompanied it.

Frustration within the largely vaccinated public is clear, with unvaccinated Canadians filling ICUs and forcing the continued cancellation of elective surgeries in multiple provinces. Now, half of vaccinated Canadians (46%) say that they do not believe that unvaccinated individuals should receive the same priority for treatment if they are sick with COVID-19. This worst case scenario has been discussed in some American jurisdictions as ICU capacity has diminished, but so far triage based on vaccination status has remained only a discussion.

The Angus Reid Institute conducted an online survey from September 3 – 6 among a representative randomized sample of 1,709 Canadian adults who are members of Angus Reid Forum. For comparison purposes only, a probability sample of this size would carry a margin of error of +/- 2.5 percentage points, 19 times out of 20. The survey was self-commissioned and paid for by ARI.