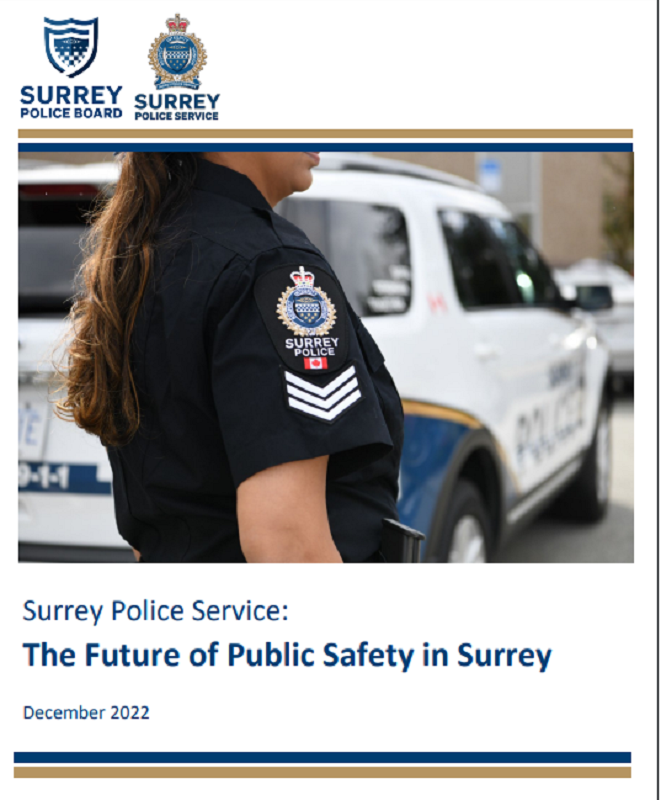 TWO reports have now been submitted to the Province of British Columbia to detail the ability of Surrey Police Service (SPS) to police Surrey safely and effectively, and to achieve the requirements to become the police of jurisdiction for Surrey in 2023.

Both reports were submitted to the Province’s Policing and Security Branch on December 22. They will be used to help inform the Minister of Public Safety and Solicitor General’s decision on the future of Surrey’s policing transition, which is anticipated in early 2023.

The first report, Surrey Police Service: The Future of Public Safety in Surrey, was submitted by SPS and the Surrey Police Board. It details why it is in the best interest of Surrey residents and of policing in British Columbia to continue with the transition to a locally accountable municipal police service.

The rationale provided in the report, which is publicly available on the SPS website, includes SPS’s proven ability to recruit and retain officers, the challenges in terminating the employment of 375 employees and dissolving two unions, the current operational capacity of SPS, and the overall benefit of SPS to policing across the province.

“This report clearly articulates the benefits that Surrey Police Service will provide both to Surrey and to policing across BC,” says SPS Chief Constable Norm Lipinski. “As the provincial government looks to modernize policing in this province, SPS’s governance, community policing model, and modern police culture are all in alignment with the recommendations made by the all-party Special Committee on Reforming the Police Act.”

The second report, Surrey Police Service Policing Transition Progress Report, was submitted by SPS at the request of the Director of Police Services. It provides a comprehensive update on the status of SPS’s work relating to the provincial requirements that must be achieved in order for SPS to assume police of jurisdiction in Surrey. This 155-page report contains detailed operational and personnel information and therefore cannot be released publicly at this time, without consultation with the Province.

“We’re not just replacing one police agency with another. We are building an innovative, forward-looking police service that is victim-focused, trauma informed, accountable, transparent in our policies and complaint processes, and compassionate and caring for our employees and those in the community,” says Lipinski. “A provincial decision to continue with this policing transition will provide the certainty required for our modernized, community-based policing model to move forward for Surrey residents.”

The Executive Summary of “Surrey Police Service: The Future of Public Safety in Surrey”:

The establishment of Surrey Police Service (SPS) has been well examined. Numerous studies and reports have been conducted by experts and more are expected to be submitted to the Minister of Public Safety and Solicitor General by the end of 2022. This report summarizes the current landscape of the Surrey Police Board (SPB) and SPS in this ongoing work toward the induction of SPS as the Police of Jurisdiction (POJ) for the City of Surrey.

SPS has clearly demonstrated their ability to recruit and retain the numbers of police officers required to serve the City of Surrey. In two years SPS has hired 375 employees. We are confident that we can hire the required number of police officers to serve Surrey in a very short period of time and we are prepared to increase hiring in anticipation of the City’s expected growth. Work is well underway and nearing completion for SPS to become POJ.

The SPB and the SPS believe that it is not in the best interests of the residents of Surrey to reverse the transition, nor is it in the best interest of policing in British Columbia. In fact, the establishment of SPS provides a net benefit to the stabilization of policing in the province by freeing up hundreds of RCMP officers to fill vacancies within that organization.

We provide the following rationale:
1. The transition has been underway for four years with the last two years placing SPS officers on the frontline. Reversing the transition would be time consuming, complicated, and costly.
2. SPS has hired 375 employees. Reversing the transition would require terminating their employment. Many officers are from outside British Columbia. These officers moved their families to Surrey in good faith, incurred debt, and started a new chapter in their lives.
3. Two unions have been formed: Surrey Police Union (SPU) and Surrey Police Inspectors’ Association (SPIA). Reversing the transition would require dissolving both unions.
4. The SPB employs 23 exempt civilian employees who are not members of CUPE 402. Reversing the transition would require that the SPB be dissolved, resulting in these employees being terminated.
5. SPS is the only major police service in Canada that is not challenged in hiring experienced police officers or new recruits (2,500 applications). It is well reported that the RCMP experiences significant challenges in recruiting.
6. Due to the high number of applicants, SPS can sustain the required number of police officers now and into the future as the city grows. To date, intensive marketing has not been required.
7. Very few SPS officers would join the RCMP. As of December 22, 2022, 95% of SPS officers signed a Surrey Police Union attestation stating they would not join the RCMP.
8. Dissolving two unions and terminating 315 police officers requires that the severance clauses of the Collective Agreement be applied as well as the implementation of relevant sections of the Employment Standards Act (ESA) and the BC Labour Relations Code. This would be costly and may also involve grievances which would not be favourable in retaining public trust. Due to the unprecedented nature of this transition, all possible termination scenarios could not be forecasted in the Collective Agreement, meaning ambiguity exists in the severance provisions. Legal costs would be probable.
9. Keeping SPS is a net gain for policing in British Columbia. Reversing the transition is a net loss. There are hundreds of RCMP vacancies in British Columbia which Surrey RCMP officers could be deployed into. No RCMP officers would have their employment terminated.
10. Reversing the transition would be contrary to recommendations of the all-party Special Committee on Reforming the Police Act [SC-RPA-Report_42-3_2022-04-28.pdf (leg.bc.ca)]. Recommendations in the report that directly support the retention of SPS include:
2) Transition to a new BC provincial police service that is governed by a new Community Safety and Policing Act. This includes:
a. Establishing a governance model, such as municipal or regional police boards or committees, that is representative of the community and provides. opportunities for local input on policing and public safety priorities.
5) a. Ensuring all policing is responsive to and informed by the community.
b. Implementing and enforcing provincial standards, policies, and expectations for service with respect to responding to individuals experiencing a mental health crisis, conducting wellness checks, responding to sexual assault, and conducting trauma-informed interviews.
7) Enhance and standardize initial and ongoing police education and training to reflect key values and competencies in order to shift police culture.
11. SPS is very close to being validated by the provincial government as the POJ. SPS would be capable of becoming the POJ in the summer of 2023. For the last two years SPS has built infrastructure, hired 375 employees, developed policies, built IT systems, and implemented training programs to be ready for provincial assessment.
12. SPS “sunk costs” by the end of 2022 are estimated at $107 million. This includes $17 million in IT systems that are primarily not compatible with RCMP infrastructure. Severance costs are estimated at $81.5 million, plus $13.6 million with ESA group termination requirements. The combined investment loss is estimated at $202.1 million. Reversing the transition raises questions about public accountability and financial responsibility.
13. Every major city in Canada has its own municipal police service. Surrey is on its way to being the largest city in British Columbia. It is broadly accepted that “local accountability” and “modernization” are two of the many reasons that large municipal policing agencies exist.

New BC Police Board Training Program