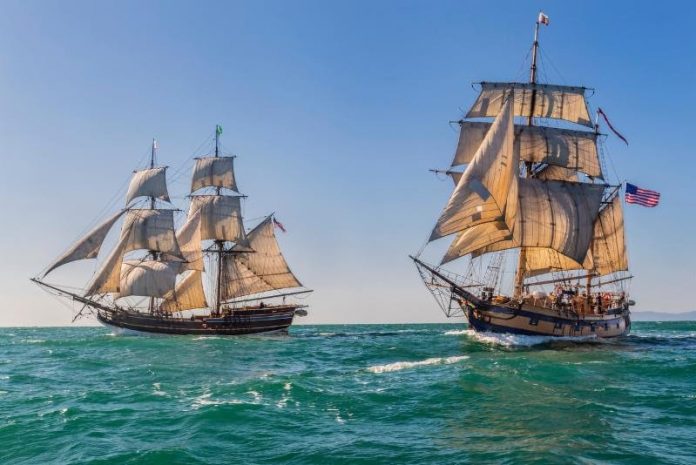 Historic vessels Lady Washington and Hawaiian Chieftain to offer tours and sails at Richmond Maritime Festival, July 26-28
THE West Coast’s Tall Ships, Lady Washington and Hawaiian Chieftain, will be returning to Richmond, B.C., this July as featured attractions of the Richmond Maritime Festival.While in town, the vessels will be docked at Imperial Landing (4310 Bayview Street) in historic Steveston and will offer vessel tours and Battle Sails for Festival guests.
Grays Harbor Historical Seaport, the educational non-profit behind this tall ships, is celebrating both vessels’ recent 30th birthdays. The tall ships of Historical Seaport are among the most active educational boats in North America, visiting over 30 West Coast communities each year.
Lady Washington is a wooden-hulled Lady Washington was built in 1989 in Historical Seaport’s home port of Aberdeen, WA to commemorate the centennial of Washington’s statehood. She is a replica of the 18th century vessel of the same name which was the first American ship to make landfall on the West Coast. Movie fans will recognize Lady Washington from her roles in Pirates of the Caribbean, Star Trek: Generations, and ABC’s Once Upon a Time, which was filmed in Steveston.
The steel-hulled Hawaiian Chieftain was built in 1988 in Lahaina, HI for Laurence “Baron” Dorcy Jr. Its design reflects the packet trader ships that sailed coastal New England in the mid 1800’s. Hawaiian Chieftain was acquired by Historical Seaport from private ownership in 2005. Hawaiian Chieftain is also the host of Historical Seaport’s professional maritime training program The Seafarer Collective.
On Friday July 26th and Sunday July 28th, ticketed guests can come aboard for a Battle Sails, taking place just off of Garry Point Park. Free Vessel Tours will take place Saturday July 27th and Sunday July 28th during Festival hours. Lady Washington and Hawaiian Chieftain will also visit the nearby port of Blaine, WA immediately following their visit to Richmond.
For more information about Grays Harbor Historical Seaport and its tall ships –including crewing and Membership opportunities– guests should visit their website at historicalseaport.org or call (800) 200-5239. Tickets for sailing and Festival information can be found at richmondmaritimefestival.ca.
- Advertisement -
Trending