OTTAWA: The Royal Canadian Legion hosted Canada’s National Remembrance Day Ceremony in full once again this year, with pandemic restrictions having previously altered the format over the past two years.

Under a bright sky and with unusually warm temperatures in Ottawa, the solemn ceremony honoured the men and women who have given their lives in service to Canada. A full Veterans’ Parade and traditional marching contingents, dignitaries and special guests, and crowds of thousands gathered around the National War Memorial to pay respects.

A fly-past by CF-18 Hornet aircraft, and a second fly-past of a Hawker Hurricane and Supermarine Spitfire, highlighted the ceremony. This is the 80th anniversary of the Raid at Dieppe, in which 916 Canadians and almost 200 allied soldiers gave their lives. A Red Ensign flag at the base of the Tomb of the Unknown Soldier, also honoured those lost. A special wreath dedicated to Queen Elizabeth paid tribute to her service as a Veteran of the Second World War. God Save the King was sung this year at the annual gathering organized by The Royal Canadian Legion. 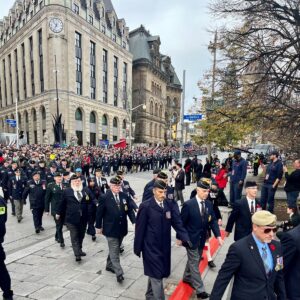 “This is the most sacred day of the year to Remember the sacrifices of our Veterans,” said Dominion President Bruce Julian. “Their sacrifices led to our freedoms and I do hope people will take time to reflect upon this, today and always.”

Candy Greff, this year’s National Silver Cross Mother laid a wreath on behalf of all military mothers who have lost children in service to their country. Her son, Master Corporal Byron Greff died in 2011 when the armoured vehicle he was in, was hit by a car carrying a suicide bomber. He was on his second tour of duty in Afghanistan at the time.

Bruce Julian, the Dominion President of the Royal Canadian Legion, also joined the Vice-Regal Party to lay a wreath. Remembrance-themed poster and literary contest artists Eugena Lee, Moon Leung, Rachel Graham and Aarika Haque together laid a wreath on behalf of the youth of Canada. Representatives of other Veteran organizations also paid tribute in this way. 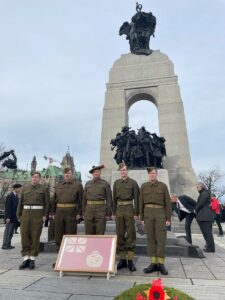 As has become tradition, many groups and individuals took time to place their Poppies on the tomb of the Unknown Soldier after the official ceremony, covering it in Poppy red.

On Remembrance Day evening, 117,000 animated Poppies – each representing one of Canada’s Fallen – will once again cascade down the Peace Tower on Parliament Hill, and the Poppy Drop will appear on the Senate building and the National Arts Centre for a final evening, until midnight.

Province helping legions continue to support veterans and their families