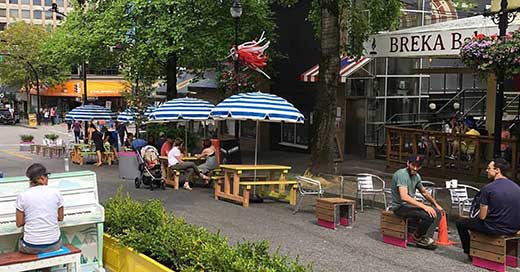 THE City of Vancouver on Tuesday announced the launch of a trial plaza on Bute at Robson Street. Opened just in time for Canada Day on July 1, the plaza will remain open until October 16. Lessons learned during the trial will inform a potential permanent plaza in this location.
“We have heard community interest in a new public space at this site and are working with local partners to launch the plaza at Bute and Robson as a three-month pilot. This plaza will build on the success of Jim Deva Plaza and is among a number of public space initiatives launching this summer” says Margaret Wittgens, Director of Public Space and Street Use.

* Design features of the space include:
* Fixed and moveable seating and tables
* A piano
* Planters
* Other elements to make the space comfortable and inviting

Intended use of the plaza

* It is intended as a place where people can:
* Sit and socialize
* Play
* Hold small events

“We are thrilled to see the launch of the Bute Robson plaza,” says Teri Smith, Executive Director of the Robson BIA. “Following the implementation of the West End Plan, the Robson Street BIA created a public realm vision for the area, including what a pedestrian plaza could look like. We are excited to see the ideations and sketches come to fruition, and we look forward to seeing people interact and gather in the space.”
The trial is a collaborative effort between the City and the Robson BIA. It will be used to measure:
* Traffic impacts
* Test different uses and configurations
* Conduct public engagement that will inform future work on a potential permanent plaza
This location was first identified in the City’s Transportation 2040 and West End plans as a potential future public space.