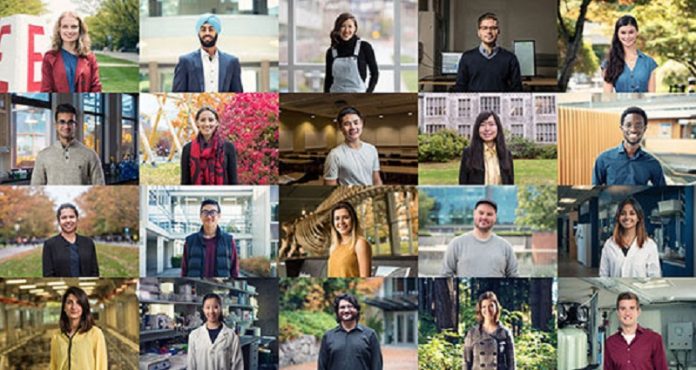 UBC has announced on Tuesday the extension of its Blue & Gold Campaign for Students, doubling the target to $200-million by 2022. In November 2017, UBC set an ambitious fundraising target of $100-million in three years to ensure more promising students had the financial help to access life-changing education and enhance the student experience. Two years on, the campaign hit this bold goal through the generosity and support of its donors.

More than 6,500 students across both UBC campuses received donor-funded support last year alone – thanks, in part, to the 15,820 donors who have contributed to the campaign including The Jim Pattison Foundation, Djavad Mowafaghian Foundation and The Charles E. Fipke Foundation.

“We’re very encouraged by and grateful for the amount of support we’ve seen for our students,” said UBC President and Vice-Chancellor, Santa J. Ono. “Students are at the heart of what we do. Ultimately, we want to ensure that more students get access to the best possible education without overwhelming financial concerns. Our Blue & Gold Campaign for Students goes a long way to helping achieve this and demonstrates the positive impact donor support has on our community.”

“We hope that by extending the campaign, more people are inspired to support a larger number of students who can drive lasting and meaningful change and create a better world,” added Ono.

The Blue & Gold Campaign is the largest fundraising campaign for students in UBC’s 104-year history. It supports a range of student awards, including fellowships, scholarships, bursaries, and experiential learning opportunities for undergraduate and graduate students at the Vancouver and Okanagan campuses. Areas of emphasis include awards that support students in need, students from under-represented communities, leadership-based academic awards, and graduate students.

For information about the Blue & Gold Campaign for Students, visit: support.ubc.ca/blueandgold

Joban Bal is one example of the positive impact of the Blue & Gold Campaign. Bal is a recent biology student who is now embarking on a career in medicine through UBC’s faculty of medicine. During his time at UBC, Bal founded the One Blood For Life Foundation in response to the growing need for blood and stem cell donations from a younger and more ethnically diverse population.

“[Donor funding] gave me the opportunity to focus on academics and my community work. I am able to explore my passions and make a contribution to a better world. But more than that – the idea that someone is investing in me and the direction I’m taking, it makes me that much more driven,” said Bal.

Another recipient is Dominica Patterson, a fourth-year student in International Relations who graduates this year. A Blue & Gold bursary helped support her dream of going to the United Nations as a conference delegate to further her interest in international relations. On track to pursue a career in this field, Dominica is turning thought into action by volunteering closer to home, supporting migrant workers who are experiencing hardship in the Okanagan valley.

“As a student, finding the balance between earning a living and doing well academically is difficult,” said Patterson. “You always feel like you’re making a choice between working extra shifts and getting a really good grade. I was lucky to receive the bursary. I got to learn things that I never would have otherwise. I’m ready to go and make a difference in the world.”

Hannah Le Bouder is a second-year behavioural neuroscience student and Presidential Scholar with dreams of eventually pursuing a career in medical research. She grew-up in the rural town of Bella Coola, B.C. During her time at high school, Le Bouder began a peer counselling group for youth to learn how to provide emotional support and a safe inclusive space for peers who needed it, including survivors of childhood trauma. She was one of eight students in her graduating class.

“Receiving this award made me realize the incredible generosity and humanity behind it. I am humbled and fuelled with a greater desire to make every cent worth it—by making the most of my education and striving to be the best student I can.”

PhD student in chemical and biological engineering, Karl Zimmermann’s research focuses on developing new technologies for drinking water treatment. Zimmermann grew up in Northern Ontario and came to UBC to be a part of a world-class research group where they are developing the next generation of filters to provide safe drinking water to the rest of the world.

“In our lab, we develop new technologies for drinking-water treatment. The support I’ve received has allowed me to expand this further, getting involved in projects where we’re bringing drinking-water solutions to First Nations’ communities in B.C., places that have never had safe clean water before. I want to say “thank you” to the donors for allowing us the opportunity to pursue our passions, to use research from the lab to develop real applications, and to bring solutions to the people of the world to make it a better place.”

Juma Orach is a master of science student, studying causes of, and treatment for, diseases caused by air pollution.

“The scholarship was the only reason I could afford to come to UBC. It moved my dreams from thinking about my small community in Uganda to thinking about the world as well. It was a life-changing moment. It meant so much to me that people who were more than 10,000 miles away from me believed in me so much they were willing to invest in my future.”

BC disappointed at US aluminum tariffs

THIS summer, have fun while exploring artistic techniques with Surrey Art Gallery’s Art Takeout “at leisure” courses. These hands-on, interactive programs are a wonderful way to try new artistic mediums, build on creative skills, all while working at your own pace from home. Everyone of all ages and...
Read more

PATIENTS can register on Monday, August 10 to be attached to a new nurse practitioner primary care clinic that will open in...
Read more

BC disappointed at US aluminum tariffs