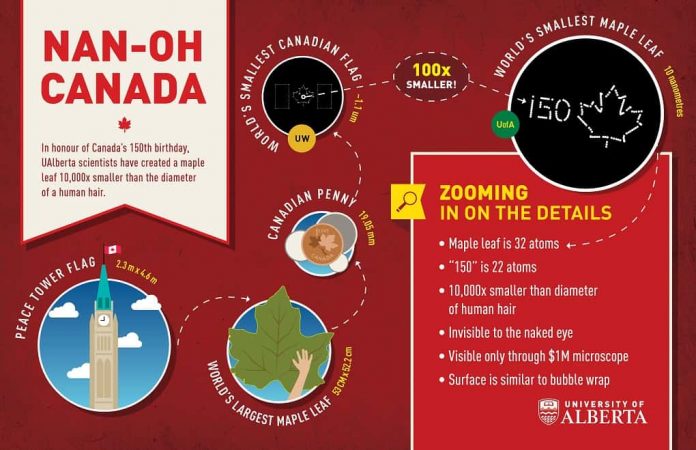 AT just 32 atoms and visible only through a million-dollar scanning tunnelling microscope, a tiny maple leaf created by UAlberta PhD student Roshan Achal illustrates the next wave of green technology, all while showing patriotic pride.

Invisible to the naked eye, the little leaf is pulling triple duty: celebrating Canada’s 150th birthday, attempting a world record, and—with critical implications for our technology-driven information society—providing critical steps towards the next generation of smaller and faster computers.

“It’s super cool and super Canadian and demonstrates our strength and skill in this niche of nanotechnology,” said Achal. “Almost no one else in the world can do it this well.”

Unlike other ultra-small atomic creations, this maple leaf retains its structure at room temperature.

The leaf demonstrates the technique of building structures atom by atom (via something called scanning tunneling microscopy), which is being used to create and study circuitry to make smaller computational components while simultaneously speeding them up. In this particular niche of nanotechnology, Canada rates high on the international stage, with the University of Alberta leading the way.

“It’s hard to imagine, because it’s so small, but picture a surface almost like bubble wrap,” explained Achal of the silicon crystal wafer on which the leaf is patterned. “The bubbles are actually hydrogen atoms bonded to the surface, and we are able to pop those bubbles to create patterns.”

Achal is working on perfecting that patterning process to make atomic structures which will help revolutionize the next generation of computing by consuming less power. He’s using an ultra-sharp tool, a tip just one atom in width, which was perfected by his supervisor, UAlberta physics professor Robert Wolkow, whom Achal calls a “visionary.”

A pioneer in scanning tunneling microscopy technology, Wolkow already has a Guinness World Record for the nano-tip, the world’s sharpest man-made object, which provides unparalleled precision for patterning electronic circuits.

Achal explained the team wanted to do something to demonstrate their technological capabilities, but also something fun and meaningful to mark the occasion of Canada 150.

While they wait to hear back from Guinness World Records with an official nod to their small sculpture, the scientists continue to perfect their technique, with significant implications for next generation computing. This capability is now being put to commercial use by local spin-off Quantum Silicon Incorporated to make revolutionary ultra-fast and efficient silicon electronic devices.