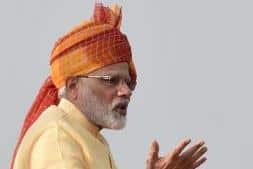 New Delhi (PTI): Prime Minister Narendra Modi on Tuesday asserted that violence in the name of faith is “not acceptable” and described casteism and communalism as “poison” for the country.

The comments assume significance in the backdrop of incidents of lynchings by cow vigilantes.

“Violence in the name of faith is not acceptable in the country,” Modi said in his Independence Day speech from the ramparts of the Red Fort.

Pitching for harmony and peace, he said “Bharat Jodo” (connect India) should be the slogan like “Bharat chhodo” (Quit India) was during the freedom struggle.

Describing casteism and communalism as “poison” in the society, Modi said such problems cannot benefit the country in any way.

Underlining that India is the land of Mahatma Gandhi and Lord Buddha, he said the culture of the country is to take everyone along on the path of development.

“Therefore, violence cannot be emphasized in the name of faith,” he said.

Referring to the ongoing violence in the Kashmir valley, Modi said: “Kashmir probem cannot be resolved by either bullets or by abuses. It can be resolved by embracing Kashmiris.”

Only a handful of separatists, he said, were resorting to “various tactics” to create problems in the state. But the government is committed to making Kashmir a paradise once again, the prime minister said.

Making it clear that there will be no softness towards terrorism, he said India’s security is a top priority for the government, and the surgical strike had underscored this.

But most of his speech was devoted to the economy as he pointed out the various reforms carried out by his government, including demonetisation, the implementation of GST and the crackdown on black money.

Referring to recent incidents of natural calamities in various parts of the country as also death of children at a state-run hospital in Uttar Pradesh, he said sympathies of the entire nation are with the affected families.

“Many parts of the country faced natural calamities in the recent past. Children died at a hospital. The entire nation is with them,” Modi said.

Honoured to address my fellow Indians from the ramparts of the Red Fort on Independence Day. Watch my speech.