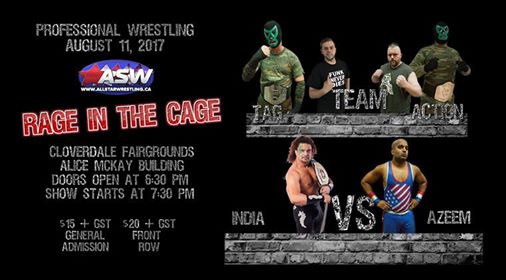 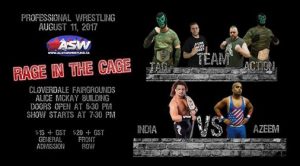 All Star Wrestling presents RAGE IN THE CAGE

Rivalries come to a head, new rivalries are started, and some are finally put to rest, inside a steel cage. That’s right, All Star Wrestling is here once again to bring you an action packed evening. So come join us, Friday August 11, as ASW presents Rage in the Cage.

The All American Azeem The Dream vs. Mr. India (Champion)

The Steel cage is back! This time, Mr. India will defend his title against the All American, Azeem the Dream. These two have a long history and have fought against each other all over the Lower Mainland. From dealing with fireballs, to countless interference in almost all matches, Mr. India has had enough and has demanded to face Azeem in a steel cage where Team USA can’t follow. Two men will be locked up inside but only one will escape and be the ASW Trans Canada Champion.

Clark Connors has been impressive since he stepped foot in the ring and now he wants to prove he has what it takes against Matt Xstatic for the Cruiserweight Champion. It won’t be easy, Xstatic has gone through Tables, Ladders and Chairs, to win that belt and he’s not ready to let it go anytime soon. But with a recent loss against Gorgeous Michelle Starr, Xstatic’s guard may be down just enough for Connors to kick it down and win his first All Star Wrestling Title.

It’s time for some Girls Gone Wrestling! Kate Carney makes her All Star return to take on the other Hall Sister, Liiza Hall. She already faced a tough match against Bambi Hall and she’s back to show she’s tough enough for Liiza. Both ladies have done amazing things wherever they have wrestled and now they meet head to head in an ASW ring, ready to wow the crowd.

When Devastation decided to interfere in the match between Mr. India and Moondog Manson, Joey Funk wasn’t about to let his one time tag partner fend them off alone. He stepped in to help and when all was said and done, a match was made and the tag belts were on the line. Moondog Manson stepped in for Freddy Funk to team with his son Joey and they have proven to be quite the formidable team. So much so, they are ready to go after the tag belts. But Devastation has been a team much longer. Will that prove to be an advantage or will we see the belts change hands?

These guys are both graduates of the Buddy Wayne Academy out of Everett, Wa. That means these two are very talented pros that know how to wrestle. There is a bit of a size difference and experience as Big Jack has been tearing up in the Pacific Northwest. Cody may be smaller but he is full of heart and could score an upset here.

Tickets are on sale now

So get your tickets fast before they sell out and we will see you August 11!!!!

For more information call 604-710-0872 or check out
www.allstarwrestling.ca