NEW data from TransLink shows bus ridership is recovering faster than all other transit modes.

The Transit Service Performance Review (TSPR) details TransLink’s 2021 ridership and reveals that bus ridership bounced back strongest of all transit modes, reaching 62 per cent of pre-pandemic levels by the end of last year. 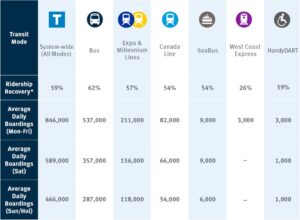 “It’s gratifying to see the commitment to transit by the people of Metro Vancouver over the last two difficult years,” said TransLink CEO Kevin Quinn on Wednesday. “Transit has long been at the centre of our communities and will continue to be imperative to Metro Vancouver life, economic growth, and tourism.”

The report also shows that TransLink’s ridership recovery was stronger than most transit systems in Canada and the United States. With overall system-wide ridership recovery at 59 per cent at the end of 2021, TransLink exceeded the average recovery rate of transit systems in Montreal, Toronto, Washington, D.C., Chicago, and San Francisco. System-wide ridership has continued to grow and is currently at 70 per cent of pre-pandemic levels. 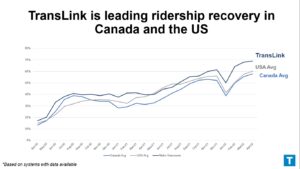 Some key findings from the 2021 HandyDART Service Performance Review: