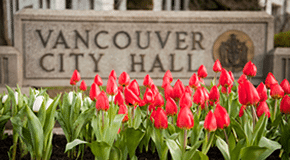 AHEAD of Saturday’s planned protests, the City of Vancouver announced on Thursday that it continues to work with the Vancouver Police Department to monitor the situation and minimize any risk to the public.

In a statement, the City said that it does not issue permits for any rallies or protests, however, these events frequently take place on the grounds of City Hall, which is public property.

It added: “In accordance with the Charter of Rights and Freedoms, the City cannot prevent people from assembling on public property for the purpose of exercising their right of freedom of expression. The City recognizes that there are limitations on free speech and that it is an offence under the Criminal Code to make statements in public which incite hatred against any identifiable group. It is not possible to know in advance whether any speech that may occur at Saturday’s protests will violate laws which relate to hate speech but the situation will be closely monitored. The City has no jurisdiction or authority to enforce the Criminal Code.

“The individuals or groups organizing the planned protests have not contacted the City, however, because we are aware of their plans, we are putting a number of precautions in place, including traffic management.

“As a City of Reconciliation, Vancouver has zero tolerance for hatred and racism and discrimination. These abhorrent attitudes have no place in our city and we expect any protest to be conducted in a peaceful, safe and non-violent manner.”