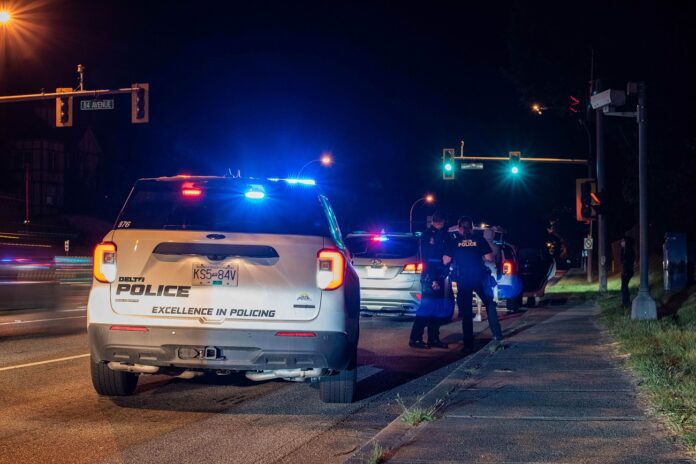 WITH the increased number of shootings across the Metro Vancouver area, including one in Delta on May 1, Delta Police are taking a number of steps to try and prevent further violence in the community. The strategy is three-pronged – interdiction, investigation and prevention.

Delta Police launched a new team May 15 – focused on intercepting any potential gang or related activity, and acting as a deterrent, through a high profile presence in public spaces such as along Scott Road and at popular restaurants.

“We’ve had good early feedback on the new team,” said Delta Police Chief Neil Dubord on Monday. “Specifically, we heard from restaurant managers and staff, as well as patrons, who welcomed the high visibility approach.”

“The public often wonders if we know who the gangsters are, or know their family members and associates,” said Dubord. “Yes, we do. Unfortunately Delta is not immune from the gang conflict. Gangsters and associates might travel through Delta, or they and family members may live here. Our analysts work closely with intelligence experts from across Metro Vancouver to share information and make sure we are well-informed on the movements of gang members.”

Officers have stepped up visits to locations where gang members are known to frequent, and made some informative stops on the weekend. Those who must abide by curfews and conditions are being checked regularly.

Police also share information on known gangsters with restaurants and other businesses. It’s called the Inadmissible Patron Program, and Delta Police Department officers continue to promote this program and work with the community to let gangsters know they are not welcome in Delta.

Although the Delta Police is part of the integrated Police Dog Services unit, Delta has its own Specialty Dog Unit. These dogs can sniff out firearms, ammunition and drugs. The dogs are working with part of the new high-visibility team, and will be called when suspicious drivers are pulled over.

“The public has a role to play as well,” said Dubord. “If people see vehicles being driven erratically, perhaps they suspect drug dealing is taking place, please call that in to police. Our officers will be following up.” The non-emergency line is 604-946-4411, but if a crime is believed to be in progress, call 9-1-1.

The current conflict is defined by an unusual development – the increased involvement of youths in gangs.

“Unfortunately, it is estimated that 50% of today’s gang members are in their teens,” said Dubord. “And contrary to what some might think, it’s not poverty that has driven them to crime. These youths typically come from a middle-class background but may suffer from other forms of trauma.”

In order to address this issue, Delta Police School Liaison Officers and the Youth Unit are working with CFSEU-BC’s End Gang Life, the Delta school district and programs such as Yo Bro and Yo Girl to divert youth from risky activity. Family members and community programs are also key, as the supports must encompass all facets of the youth’s life.

“We started to see an increase in the demand for intervention and preventive steps with youths in 2020, and our officers have only gotten busier, as youths struggled with the impact of the pandemic and other related issues,” said Dubord. “But we know the effort we are putting in now will pay off in the long term.” He urges any parents who may have concerns to reach out to police or through the school.

“This is a very active investigation, and our officers are coordinating their efforts with all police agencies, as well as CFSEU-BC, IHIT, the Real Time Intelligence Centre and the Organized Crime Agency,” said Dubord. “The cooperation between agencies is excellent.”

Police received good information from the public, and continue to solicit photos, videos and other information, which can be uploaded directly through a link on the front of deltapolice.ca.