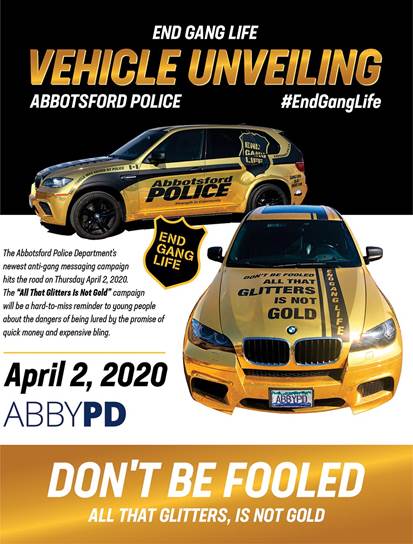 THE Abbotsford Police Department’s newest anti-gang messaging campaign hit the road on Thursday. The “All That Glitters Is Not Gold” campaign will be a hard-to-miss reminder to young people about the dangers of being lured by the promise of quick money and expensive bling.

B.C.’s civil forfeiture program recently loaned a BMW X5 to the Abbotsford Police Department, which has now given it a custom-designed gold chrome wrap. The “Don’t Be Fooled. All That Glitters Is Not Gold” message aims to draw the public’s attention to the fact that the vehicle was seized by police from a criminal. AbbyPD hopes that the BMW will initiate conversations about how the “gangster lifestyle” is not all it appears to be on the surface. Criminal activities might not only land gangsters in jail but can result in the loss of the possessions that attract them to the lifestyle in the first place.

The BMW will be driven by Abbotsford Police officers and will be prominently displayed at community presentations and public events. Community Police Office Sgt. Kelly Joiner said, “This vehicle is a visible reminder that a gang lifestyle doesn’t pay in the end. We want the community to see this vehicle and ask us why the Abbotsford Police are driving a gold BMW X5 – hopefully this will lead to a conversation about ending gang life.”

“By offering free use of forfeited, high-profile vehicles, we can help to foster conversations and stronger connections between police officers and citizens of all ages,” said Minister of Public Safety and Solicitor General Mike Farnworth. “Doing this really compounds the public safety value of civil forfeiture, which takes vehicles and other assets out of criminals’ hands.”

Sgt. Brenda Winpenny, Media Relations Officer for the Combined Forces Special Forces Unit of B.C., added: “We are very pleased to support the Abbotsford Police Department, as we have done with several other policing partners in the province, utilizing our well-known End Gang Life branding. We work very closely with the AbbyPD in support of their gang awareness, prevention and education initiatives, and this forfeited vehicle will be an invaluable tool to engage youth and young adults on the risks and dangers associated with the gang lifestyle.”

B.C.’s Civil Forfeiture Office (CFO) works to undermine the profit motive behind unlawful activity by taking away tools and proceeds of that activity. The vast majority of cases the office pursues have links to drugs, gangs and organized crime. The CFO has forfeited hundreds of vehicles since program inception in 2006, the vast majority of which are linked to drug trafficking, illegal weapons, gangs and/or organized crime. Overall, the value of property linked to unlawful activity and forfeited to the Province under its civil forfeiture program now exceeds $100 million.